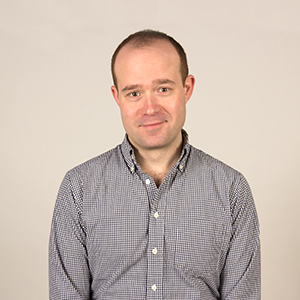 After earning his first BFA in Painting & Drawing Eric got his hands dirty with some real-world experience in art and media production at Super!Alright! and Synthetic Pictures, both in Austin, TX. There he honed his skills in motion and interaction design as well as video production. He found real joy in working both on set and off set in post-production with projects for Dell, SXSW, the Central Texas SPCA, and independent filmmakers. After three years Eric returned to the midwest and decided to expand the scope of his wheelhouse by returning to school for a 2nd BFA in Graphic Design & Visual Communication. Since then his toolbox has grown immensely. He’s earned real design experience while working as a designer for the Peck School of The Arts, and his efforts have been acknowledged by the Bill & Melinda Gates Foundation as a runner-up in the Records for Life contest for standardizing child immunization records.