Home » Events » Mapping the Sacred in the “Land of Kings”: Myth and Warfare in a Fifteenth-Century Hindu Kingdom

About the speaker:
Adam Newman received his Ph.D. from the University of Virginia in 2019 and is an assistant professor at the University of Illinois at Urbana-Champaign. He concentrates on the religious traditions of South Asia, specializing in the study of Hinduism in Rajasthan, in particular the Mewar region, during the medieval period.

About the talk:
In this talk, the speaker will explore the ways in which sacred spaces, including both the natural and the built environment, and mythological narratives were used for political control in the Hindu kingdom of Mewar in Rajasthan (India) during the fifteenth century. The talk also examines the mythological and political expression of historical trauma and military conflict in a regional Hindu kingdom, while at the same time it theorizes the role of borders, historical memory, and sacred story in the formation of cultural identity more broadly.

For questions about the event, contact Prof. David DiValerio at divaleri@uwm.edu 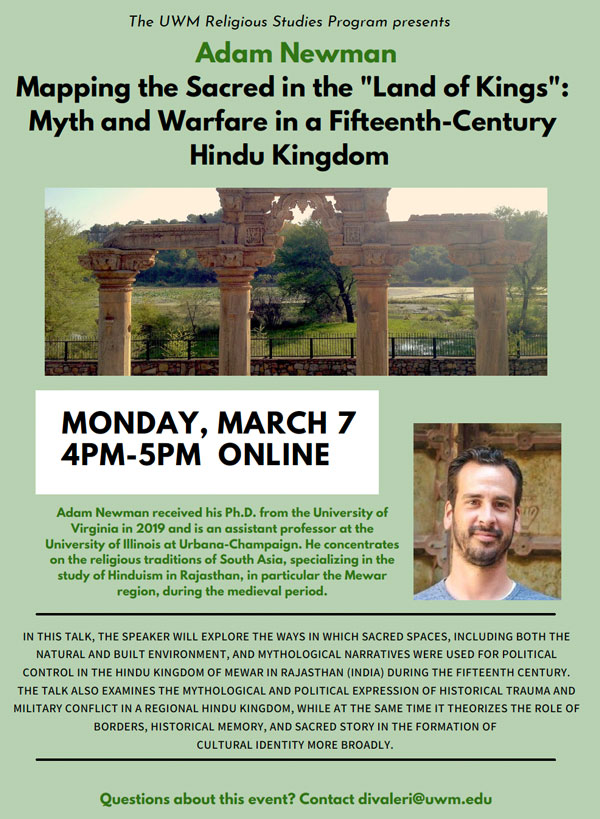