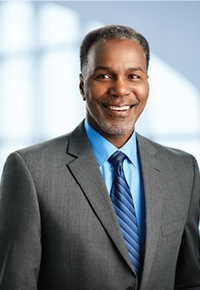 Fueled by a lifelong commitment to leadership excellence in Human Services, Clarence Johnson has held many high-level positions since beginning his career decades ago. Clarence believes the key ingredients to effective and successful leadership include holding yourself accountable to the highest standards of performance and empowering and supporting others to reach for their highest level of effectiveness. As one of the most experienced African American nonprofit leaders in the Milwaukee area, Clarence has helped to shape the future of several nonprofit organizations in the Milwaukee Community and is held in high regard in many circles. During his long and distinguished career, Clarence has also served on over 20 nonprofit boards and remains an active member of the Milwaukee area community. Clarence was recently elected to the board of directors of the Wisconsin Association of Family and Children’s agencies and is also serving as a board member for NAMI Southeast Wisconsin.

Mr. Clarence Johnson is currently serving as the Executive Director of Wisconsin Community Services, a position he has held since January of 2017. Established in 1912, Wisconsin Community Services, Inc. (WCS) is a non-profit organization respected throughout the Milwaukee region and state of Wisconsin for its steadfast commitment to bettering the lives of individuals involved in, or at risk of becoming involved in, the criminal justice system. WCS provides services to more than 15,000 individuals each year through 40+ programs in southeastern Wisconsin. The mission of WCS is to advocate for justice and community safety, providing innovative opportunities for individuals to overcome adversity. Since assuming top leadership role at WCS, Clarence has led the organization to a 62% increase in revenue (from 24 million to 40 million dollars), and significantly expanded the number of programs offered by the agency. Johnson was also instrumental in leading the effort that which resulted in the WCS Center for Driver’s License Recovery being named as one of Mutual of America’s three national 2019 Community Partnership Award winners. A national award that honors the outstanding contributions that nonprofit organizations, in partnership with public, private, and other social sector organizations, make to society.

Johnson joined Wisconsin Community Services in 2010 as the Associate Executive Director. In addition to providing high-level leadership, Johnson was then responsible for various programs and divisions, which helped to expand the work of WCS, and cultivate partnerships with community organizations and stakeholders. Clarence also brought Community Building Milwaukee to WCS, which involves numerous agencies, institutions and organizations across the Milwaukee community serving, youth and adults. Johnson is a lifelong resident of city of Milwaukee and earned both his undergraduate and graduate degree from the University of Wisconsin-Milwaukee. Has worked on several research projects during his career and began a program to reduce the incidence of obesity and chronic disease among central youth. A program that is now offered city-wide. Working for over 35 years in Social Services, Johnson has extensive experience working in and leading nonprofit, government, and human/social services agencies in the Milwaukee area. Prior to his time at WCS, he served as  Executive Director of Neighborhood House of Milwaukee, Chief Operating Officer for YW Works (then subsidiary of the YWCA), and spent several years as a high level manager for Milwaukee County Department of Health and Social Services.