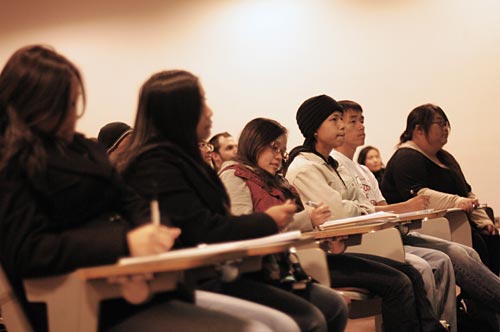 Why a Program in Hmong Diaspora Studies?

The Hmong Diaspora Studies Certificate Program at UW-Milwaukee was initiated in 2009 to provide undergraduate students with multidisciplinary perspectives on and knowledge of Hmong history, culture, and contemporary life. As one of the world’s ethnic groups without a nation of their own, Hmong people live as minorities throughout the world. While the vast majority resides in southern China, today there can be found on five continents. Those in Southeast Asia became entangled in major political and military conflicts during the twentieth century as leaders of great nations vied for global power. The forced migration of those from Laos to the Western Hemisphere has been met with mixed reactions. Because of their agrarian background, few people thought they could survive in Western nations and some even predicted the ethnic group’s extinction. Dispersed to the Americas, Europe, and Oceania, they have struggled to rebuild their lives and to make sense of their existence in the places that they now call home. The life experiences of Hmong people differ significantly depending on the social, cultural, economic, and political conditions of specific locations. Consistent with UWM’s commitment to preparing students to become well-informed global citizens, the Hmong Diaspora Studies Program enables students to compare and contrast the experiences of people of Hmong ethnicity throughout the world.

Since Hmong refugees began arriving in the United States in the mid-1970s, Wisconsin has had the third largest Hmong population. By the year 2000, the Milwaukee metro area became the fourth largest concentration of Hmong Americans and the Hmong continue to be the largest Asian group in the state. A few Hmong students began to enroll at UWM in the early 1980s and as the population grew, so did enrollment. In 2015, more than 600 Hmong American students attend UWM.

The increasing number of students on campus also meant that they became interested in seeing Hmong and other Asians reflected in the curriculum and at campus events. In 2003, the Cultures and Communities Program supported a Hmong American Studies Initiative. Led by then doctoral student Vincent K. Her and associate professor of English Mary Louise Buley-Meissner, a series of Hmong-related events took place on campus. Support from Rachel Ida Buff, associate professor of history and comparative ethnic studies, enabled Vincent to develop and teach the first Hmong history course in 2005 (Ethnic 265). In Spring 2006, Rachel sought support from then Provost and Vice Chancellor for Academic Affairs, Rita Cheng, for a tenure track position in Southeast Asian/American Studies and in Fall 2006, Chia Youyee Vang joined the history department with teaching responsibilities in history and comparative ethnic studies. During the same time, Garry Davis, associate professor in linguistics, had advocated for the offering of a Hmong literacy course as part of the uncommonly taught language course offerings in the Foreign Language and Linguistics department. From 2006 to 2009, Chia conducted an environmental scan of course offerings that included Hmong-related contents and in Spring 2009, the Hmong Diaspora Studies certificate program was approved by the Academic Policies and Curriculum Committee (APCC) in the College of Letters and Science enabling it to have its own curricular area. As an interdisciplinary minor, the certificate program attracts students from all disciplines and community members often enroll in Hmong Studies courses.

The Hmong Diaspora Studies certificate program is administered by a committee composed of faculty and staff members appointed by the Dean of the College of Letters and Science and a student member appointed by the Hmong Student Association. It collaborates with the Comparative Ethnic Studies Program, the Cultures and Communities Program, and other units to host campus events and works closely with the Southeast Asian American Student Services office to support students. It also works closely with community partners to provide outreach and education to first generation college students and their families.

Meet with us in-person, over the phone, or videoconference to learn more about the Hmong Diaspora Studies program. When classes are in session, we can even arrange a class visit to give you a taste of UWM life.