Join us in person for the 25th Annual Festival of Films in French which resolutely showcases films about women and by women. Celebrating world-cinema in French, this edition of nine films highlights women’s artistry, their societal and familial roles, their activism and engagement with others, their sense of social and environmental justice, and recognizes the directors who bring these generations of women and actresses to the silver screen.

The first weekend spotlights the rich diversity of Quebec’s fecund cinema, featuring Je m’appelle Humain, the moving life journey of Innu poet, Josephine Bacon captured in poetry by documentarist Kim O’Bomsawin along the trail of the Master of the Caribou as she bears witness and seeks to keep alive her language, culture, and traditions.

Nin e tepueian – Mon cri focuses on the next generation of Innu activists, in the person of Natasha Kanapé Fontaine whose own passionate voice interrogates the longstanding racist disregard of indigenous peoples.

Strong female characters take the lead in La langue est donc une histoire d’amour as immigrants to Montreal share heartrending stories with their French language teacher, and in Antigone, whose eponymous young Algerian immigrant character is caught up in a modern tragedy that pits love of family against the cold rule of law in a struggle that is largely played out on social media.

Following on from the women’s difficult survival stories in the context of climate change tenderly recorded in Marcher sur l’eau, Alice Diop’s juxtaposition of History and individualized stories conjugates their pluralities together with the spaces they occupy along the RER B in her finely tuned contemporary documentary Nous.

Mati Diop is both daughter to Lionel the sensitive RER conductor caught in the tracks that their quotidian has ritualized in Claire Denis’ 35 rhums and the first Black woman director selected for Cannes’ main competition for her 2019 Atlantique, a haunted feature-length fiction about the young women left behind in Dakar as their male partners and family members depart clandestinely in precarious crafts for other shores.

Ending the Festival is Germaine Acogny, the doyenne of Contemporary African Dance who is seen (after her cameo appearance as Tanam in Yao), in Iya Tundé, la mère est revenue, Laure Malécot’s documentary about the dancer-choreographer’s own life practice and titled eponymously after her 2015 historical and familial solo.

Come in from the cold and behold the cinematography of this year’s selection once again on the big screen!

Support the Festival of Films in French at UWM

Won’t you consider a gift today to help us continue to bring French cinema to the greater Milwaukee area for years to come? All gifts of any size are greatly appreciated. 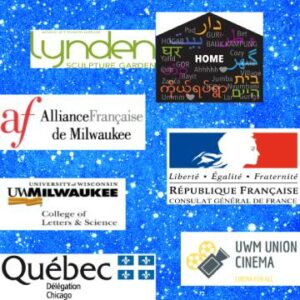 The UWM French Program is grateful for the generosity of The Quebec Government Office in Chicago, The Alliance Française of Milwaukee, HOME, Lynden Sculpture Garden, Kitty Morse, SWAAF (Southeast Wisconsin Academic Alliance in French), The Milwaukee French Immersion School, and Dr. Richard Stone. We thank our many UWM co-sponsors, past and present: The Department of French, Italian, and Comparative Literature (FICL), The Master of Arts in Language, Literature, and Translation (MALLT), The Department of Dance, The Center for Latin American and Caribbean Studies (CLACS), The Department of African and African Diaspora Studies, Student Involvement, Union Programming, The Film Studies Program, The UWM OSHER French Class in honor of Professors Gabrielle Verdier and Jim Mileham, Sam and Helen Stahl Center for Jewish Studies, The College of Letters and Science, Global and International Studies, The Institute of World Affairs, The Center for International Education (CIE), The Milwaukee LGBT Film/Video Festival, and The Department of Film, Video, Animation, and New Genres. We greatly appreciate the community sponsorship of the Alliance Française of Milwaukee, the Milwaukee French Immersion School, and SWAAF (Southeast Wisconsin Academic Alliance in French). We extend a special note of gratitude to Professor Martine Meyer (1929-2013) and Professor Emerita Gabrielle Verdier for their vision in establishing the UWM Festival of Films in French.

We are seeking additional sponsors. If you’re interested in sponsoring the UWM Festival of Films in French, please see our sponsorship page.