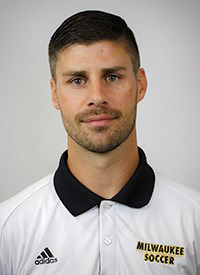 Kyle Zenoni enters his fifth season as the associate head coach for the Milwaukee Panthers in 2019. This will be his tenth season overall as a coach in NCAA Division I men’s soccer.

Zenoni returns to where he started his collegiate coaching career, having served as an assistant coach with the Panthers in 2010 before spending the 2011 campaign at Green Bay as an assistant on Kris Kelderman’s staff with the Phoenix. In addition, he was a four-year letterwinner (2002-05) on the field for the Panthers.

“I am extremely excited to have Kyle on board with me as my right-hand man,” Kris Kelderman said at the time of his hiring. “I was fortunate enough to have him with me in Green Bay and I hit the jackpot when he decided to come and join me again. He is a guy that knows a great deal about the game of soccer, he’s a very hard worker and, most importantly, he’s a very good person. Those are all things that are important to me and how I want to proceed and move forward with my staff and with this program.”

Zenoni also provided an instrumental role for the Panthers in the spring of 2010 - serving as the interim coach and overseeing UWM through a 2-2-2 slate (4-2-0 after PK shootouts) that April.

“To be back at a school that I am so passionate about and to work with a guy like Kris Kelderman, words can't explain it," Zenoni said at the time. "He is someone I look up to and I feel very fortunate to be a part of his staff once again. We did well at Green Bay and it will continue here at Milwaukee."

As a player, Zenoni led the Panthers to the second round of the NCAA Tournament each season he took the field. He was a four-year starter at Milwaukee - his 83 career games played ranks tied for seventh in program history - serving as team captain during his senior campaign.

After being selected by the Chicago Storm in the MISL Draft following his collegiate career, Zenoni traveled overseas to continue his professional career. He spent time with Dundee FC, a team in the Scottish Premier League, to begin his trek, while also playing for Falu FK (a Division 1 club is Sweden), La Paz FC (Premiership in South America) and with the Minnesota Thunder (USL) back in the United States.

A native of Milwaukee, Wisconsin, Zenoni earned his United States Soccer Federation (USSF) Class-A Senior License in September of 2019. In 2017, he was inducted into the University Wisconsin-Milwaukee Bud K. Haidet Athletics Hall of Fame.

In addition, Zenoni is Director of the Bavarians Academy program since 2014, which has over 190 players and oversees more than 20 coaches. His coaching career has included Director of Player Development for Whitefish Bay Soccer Club, Coach for Olympic Development Program and working with Special Olympics as well as Operation Dream.