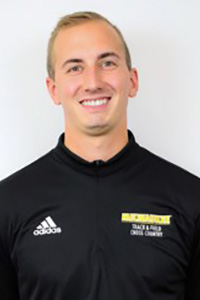 Corey Wilch joined the Milwaukee track and field and cross country staff as an assistant coach in the summer of 2019.

Wilch comes to MKE with an impressive resume, spending this past season coaching at Carroll University where he helped coach the Pioneers' first ever NCAA Indoor National Champion.

"I am extremely excited to add Corey to our staff and Panther family," head coach Andrew Basler said. "Throughout the hiring process, Corey demonstrated an enthusiasm for Milwaukee track and field and a proven training philosophy that I believe will continue to help push our program to the level of success we know we can achieve.

Wilch spent the past season just down the road at Carroll University. In just one season with the Pioneers, he helped them reach impressive heights – headlined by aiding in the coaching of the program's first ever NCAA Indoor National Champion. Wilch also helped Carroll nearly quadruple their point total at the indoor conference meet and coached their first women's NCAA Indoor national qualifier in eight years.

He also was integral in developing a new program at Carroll; developing a strength and conditioning and workout program that was highly focused on injury prevention. Wilch also worked as an assistant recruiting coordinator with the Pioneers.

That comes after nearly three years coaching with his alma mater in Division-III powerhouse UW-Oshkosh. With the Titans, Wilch again developed strength and conditioning and workout programs that helped produce eight NCAA All Americans, 16 NCAA National Championship qualifiers, 42 individual all-conference performers, five school records and the 2017 Wisconsin Intercollegiate Athletic Conference (WIAC) Women's Indoor Track Athlete of the Year. During his time, he also helped UWO finish as the NCAA Indoor National Runner-Up on the women's side.

Wilch is a highly decorated former student-athlete with the Titans. He is a nine-time NCAA All American, twice finishing fourth in the 400m hurdles on the national stage. He won six conference titles in the highly competitive WIAC and reset three school records during his time on campus. He was also a standout in the classroom, being named an NCAA Academic All American two times.