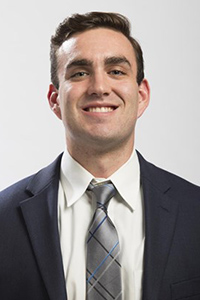 Eric Weiss joined the staff of the Milwaukee men's basketball program prior to the start of the 2018-19 campaign.

He spent last season as a graduate manager, helping out in all aspects of the program.

He will also serve in the position of Director of Basketball Operations in 2019-20. In that role, he will work directly with head coach Pat Baldwin on coordinating team travel, budget, practices and other program functions.

Weiss, who calls Birmingham, Mich., home, graduated from Lawrence University in 2018 with a degree in history. While at Lawrence, he played basketball for four years for the Vikings and was a team captain. He was named to the Academic All-Midwest Conference Team and NABC Honors Court in 2018.

His coaching background includes working camps at Duke, UConn, Five Star, Morgan Wootten, Marquette, and Penn during college. He also interned as a Hoop Group Elite Runner in summer of 2016 and 2017.

His resume also includes time as the head coach of Wisconsin Swing 16u (2018) and assistant coach for Wisconsin Playground Warriors 16u (2016) AAU teams.