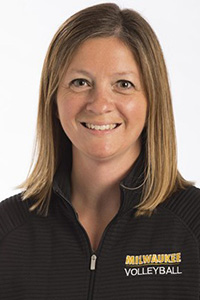 Lindsey Vanden Berg is starting her 13th season as the top assistant for the Panther volleyball program after spending two seasons as the program's director of operations.

Vanden Berg, formerly Lindsey Spoden, was a standout player for the Panthers from 2000-03, becoming the first-ever UWM player to earn Division I All-America honors. In fact, her play on the court during her time as a Panther has earned her a spot in the Bud K. Haidet UWM Athletics Hall of Fame.

A four-time All-Horizon League honoree, Vanden Berg was the American Volleyball Coaches' Association Midwest Region Freshman of the Year in 2000 and an honorable mention AVCA All-American in 2003. She also earned all-region honors twice and was the co-player of the year in the Horizon League in 2003.

Vanden Berg is second in school history in assists, fourth in digs and UWM's career leader in aces. She helped the Panthers to three NCAA Tournament berths and a pair of league titles during her stellar four-year career.

In her assistant coaching role, Vanden Berg has taken on more on-court responsibilities while also working extensively on the Panthers' recruiting efforts. Vanden Berg's spot on the staff also puts an alum of the program in a crucial role on the staff.

Vanden Berg started her coaching career by working with the Milwaukee Sting Volleyball Club before returning to UWM in 2005.

A native of Alexandria, Minn., she married former Panther baseball player John Vanden Berg in the summer of 2007. The couple has an eight-year-old daughter, Brooke and a five-year-old son, Cole.