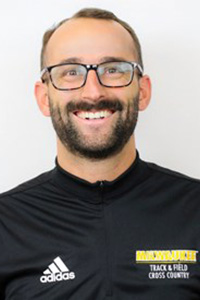 Jake Reilly - the 2018 Horizon League Women's Cross Country Coach of the Year - enters his sixth season as the top assistant coach for the Milwaukee cross country teams in 2019-20. That comes after one year helping coach the team as a student assistant while completing his track & field eligibility.

Reilly continued his impressive coaching campaign in the 2019 cross country season. In a breakout year for Meg Swietlik, he helped guide her to First-Team All-League honors after a third-place finish at the Horizon League Championships and to All-Region honors--only the fourth Panther in program history. The Panther men jumped into the regional rankings for the second consecutive year at No. 14 with the push from Corey Thornton--now a two-time First-Team All-League member.

In his first season coaching both the men's and women's distance programs, Reilly shined. He was named the Horizon League Coach of the Year after guiding the Milwaukee women to a league title in his first season directly overseeing that program. Mikayla Fox capped an impressive junior season as the league runner-up - just the second top-two finish for MKE since moving to the Horizon League back in 1994. The Panther men also brought home a league runner-up trophy, making it arguably the best showings across the board at league meet in program history. After their strong showing at conference, the Milwaukee men also earned a regional ranking for the first time since 2015.

The success more than carried over into the track season, headlined by the remarkable season from Emily Royston. The sophomore punched her ticket to the NCAA West Regional in the 10,000m after shattering the school record by 26 seconds the first time every running the event competitively in her life. Royston also broke the league record in the 10k - one of three Panthers to score in the event.

In all, Reilly coached the Panthers to a whopping 19 top-10 finishes in program history and a pair of school records (Royston's 10k and Terry McMillan in the men's mile). In all, his athletes finished on the podium 26 times during the indoor and outdoor championships for a total of 113 points across the board.

The 2017-18 season was truly a special one for Milwaukee's men's distance program. In track, Milwaukee racked up a whopping 88 points at the Horizon League Championships between indoor and outdoor.

The most impressive showing came in the outdoor 800m where Milwaukee took three of the top-four spots. Drew Dueck just beat out teammate Alex Cotter for a 1-2 finish, with newcomer Michael Sippy taking fourth. That marked the first time a Panther had won the event since Jeremy Majors did so three years in a row from 2005-07. Reilly also coached Terry McMillan to runner-up finishes in the 1500m and steeplechase, as well as the indoor mile. McMillan also earned all-league honors in cross country after taking ninth overall.

That came just one year after the men's distance program racked up an impressive 56 points at the league meets in 2016. That feat was highlighted with Milwaukee runners nearly completing a sweep of the medals in the outdoor 800m, taking second, third and fourth overall in an incredible photo finish. In fact, four more Panthers scored in the women's 800m, giving Milwaukee seven scorers in the event and a total of 35 points - nearly half of the total possible.

In 2015, Leah Holmes finished as the Horizon League Cross Country Runner of the Year on the women's side - the second-straight year the Panthers have boasted the league's top runner. Holmes' title was the first ever for a Panther woman at the league meet. Holmes also was named Horizon League Athlete of the Year in both cross country and indoor track & field that season.

That came on the heels of a truly memorable 2014 season that saw both the men's and women's cross country teams finished second overall at the Horizon League Championships - the highest combined finish for both programs since 1996.

Reilly coached Marcus Paulson to an individual league title - the first individual men's title in nearly 20 years. Three more earned all-league honors on the men's side as UWM finished with 59 points - a mere two points shy of a league title.

At the 2014 NCAA Midwest Regional, Milwaukee had two finish in the top-65 for the first time since 1997. Paulson finished 57th and Caleb Abfall 64th to help the team to a 15th-place finish out of 30 teams.

Reilly has also made impressive strides on the recruiting trail, bringing in a number of talented area standouts to join the Black & Gold, including the highly sought after Noah Tagliapietra.

Reilly had a stellar running career at Milwaukee. In cross country, he scored at the league meet all four years, highlighted by a pair of first-team all-league finishes (fourth place as a junior, third as a senior). He also had a standout career on the track, taking second-team all-league honors in the outdoor 5000m as a junior. In all, Reilly scored at the league meet nine times in track across three different events (1500m, 3000m and 5k). He graduated with his name on five all-time top-10 performance lists in program history, including being part of the school record in the outdoor DMR and second all-time in the outdoor 5000m.

Reilly also serves his country as a member of the United State Marine Corps Reserves.