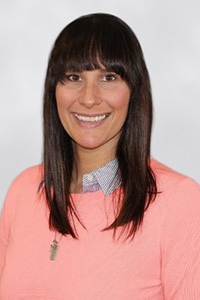 Kyle Rechlicz enters her eighth season as the head coach of the Milwaukee women's basketball team in 2019-20.

Rechlicz has quickly led Milwaukee back to a place of prominence and seemingly completely rewritten the record book, headlined by trips to the postseason in each of the last four seasons, racking up a combined 77 wins over that duration - the most wins in a four year span in the program's Division 1 history.

The 2017-18 season was a memorable one for the Panthers. Rechlicz coached her team to 21 wins, the second-highest total in program history. It also marked the the first time since moving to Division-I that Milwaukee recorded back-to-back 20-win seasons. The team earned an at-large berth to the Postseason WNIT, opening things up with an impressive 81-67 road win.

Rechlicz coached a pair of players to postseason honors in 2017-18. Steph Kostowicz and Jenny Lindner were both named to the All-Horizon League teams, marking the first time since 2005-06 that Milwaukee earned a pair of representatives on the 10-player all-league team. Panther players also have been recognized with Horizon League Athlete of the Week honors 14 times over the past four seasons.

Rechlicz has quickly made her name known and within the region in making Milwaukee a force to be reckoned with. During the 2017-18 season alone, the Panther took down two Big Ten foes (Wisconsin and Northwestern) on the road to go with five wins over fellow Mid-Major ranked opponents. That comes one year after beating in-state rivals Wisconsin (80-63) and Green Bay (72-60) for the first time in the same season in 25 years.

2016-17 was also a special year in that Rechlicz led her team to a 22-12 campaign, tying the program record for most wins in a season. That was culminated with a berth to the WBI, where the Panthers advance all the way to the semifinals.

That all came just one year after Rechlicz made a big splash in 2015-16. Despite being picked ninth in the 10-team Horizon League, Rechlicz guided that team to a second-place finish in both the regular season and conference tournament. That marked just the third time in league history that a team finished in the bottom two one year and the top two the following season for an incredible turnaround. That earned Milwaukee a berth in the WNIT - the team's first postseason appearance in a decade and just third overall, finishing with a 19-13 overall record.

For all of her efforts, Rechlicz was named Horizon League Coach of the Year in 2016, becoming just the second coach in program history to earn that distinction.

Looking back, the writing was on the wall for all this success for Rechlicz. In 2014-15, her team claimed UWM's first postseason victory in five years, featured a first-team all-league selection for the first time since 2010-11 and also had a member of the league's all-freshman squad for the first time in four seasons.

Her team broke three Horizon League records and 10 different school records, including fewest turnovers per game and a new standard for points in a contest when the Panthers finished with 116 against Bradley.

In addition to scoring, her teams also take care of the ball. The Panthers broke the school record for fewest turnovers per game her first season, reset it her second season and now hold the top three spots.

Rechlicz was named the seventh coach in program history in May 2012 and came to Milwaukee from the University of Wisconsin. There she served as assistant coach and recruiting coordinator for the Badgers during the 2011-12 campaign.

"I am looking forward to building a championship Horizon League program that features an exciting style of basketball, focuses on student-athletes being prepared for life after their playing days, and links the student body, community and alumni to Panther Women's Basketball," Rechlicz said at the time.

Many Wisconsin basketball fans may better know Rechlicz as Kyle Black, who was a key member of very successful UW women's basketball teams from 1998-2002. For the 2000-01 and 2001-02 teams that went to the NCAA tournament, she served as co-captain and was named to the Academic All-Big Ten Team.

Rechlicz, who was brought back to her alma mater in April 2011 by then first-year head coach Bobbie Kelsey, directed the UW-Madison recruiting efforts that led to the signing of five highly regarded players and one transfer from Connecticut. She also assisted with all aspects of on-court coaching, with specific responsibility for player preparation and skill development of guards.

As a Badger, Rechlicz helped guide Wisconsin to four postseason appearances, including NCAA tournament berths in 2001 and 2002. She was one of Wisconsin's premier three-point shooters, setting a school record with seven triples in collecting a career-high 26 points against Holy Cross. She led the Big Ten Conference in three-point field goal percentage as a junior, hitting 40.6 percent from beyond the arc. As a senior, Rechlicz earned her second Academic All-Big Ten honor while averaging a career-best 12.1 points per game.