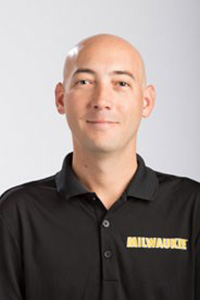 Jason Potthoff is in his first season as the head coach of Milwaukee's women's tennis program.

Potthoff comes to UWM after serving as an assistant at the University of Houston the past two seasons where he helped guide the Cougars to an Intercollegiate Tennis Association (ITA) national ranking high of No. 38. Last season, Tsveta Dimitrova was named AAC Freshman of the Year during Potthoff's tenure. Potthoff's primary responsibilities included recruiting and on-court coaching efforts in the American Athletic Conference.

"I first want to thank Deputy Athletics Director Cathy Rossi for being such a great ambassador for Milwaukee during the search process. I am grateful to Director of Athletics Amanda Braun and Senior Associate AD Kathy Litzau for giving me this opportunity to be the next head women's tennis coach at Milwaukee, and I can't wait to get started. I look forward to getting to campus, connecting with the team, and preparing for the season. We have so many great resources and such a great support staff at Milwaukee, and this team will be dedicated to making all Panthers proud by what we do, both on and off the court!"

Prior to Houston, Potthoff spent four seasons at the University of Missouri as an assistant, where he was also in charge of recruiting and on-court player development. During his time at Missouri, Potthoff helped lead the team to an ITA national ranking of No. 42, while having coached at least one singles player nationally ranked by the ITA in all four of his seasons. His student-athletes were successful both on and off the court as Missouri's teams earned ITA All-Academic honors in each of his four seasons.

For over three years (2008-2011), Potthoff served as a traveling tournament coach at John Newcombe Tennis Academy previous to Missouri. He assisted over 75 high school student-athletes in the recruiting process to become collegiate tennis student-athletes. In addition to his recruiting efforts, Potthoff worked with nationally and internationally ranked junior players, including private lessons, group drills, and match coaching.

Following his graduation from Texas A&M in 2005 with a B.A. in marketing, Potthoff began his coaching career as a graduate assistant for the men's tennis team (2005-2007), while obtaining his M.S. in kinesiology in 2007.