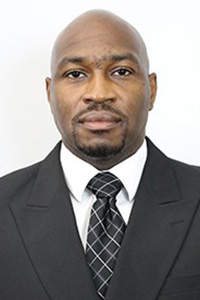 DéRonté Polite is the assistant coach and recruiting coordinator for the Milwaukee women’s basketball program, joining the staff in July of 2019.

“We are pleased to announce the hiring of DéRonté Polite as our new assistant coach,” head coach Kyle Rechlicz said at the time of the hiring. “From the moment I met him, I knew I wanted him on my staff one day. From a basketball standpoint, he has a wealth of knowledge and his organizational skills will help keep us on track in recruiting. From a personal standpoint, DéRonté has an incredible passion for the game and shares many of the same core values as our program. I can’t wait for him to work with our current and future players. I hope that everyone in the UWM and Milwaukee community will embrace him and his family with open arms.”

Polite comes to Milwaukee following one season at Lincoln College in Lincoln, Ill. In his one season as the head coach, he led the Lynx to a 16-13 record as the program transitioned from the NJCAA to the NAIA level.

“I am extremely excited to join the University of Wisconsin-Milwaukee and the Panthers Women’s Basketball Family,” Polite said. “The culture that Coach Rechlicz has developed here was a major factor in my desire to join this staff. I am eager to learn from Kyle, and the other members of the staff, as we seek to positively impact the lives of the young women in our program.”

Prior to Lincoln, he spent four seasons as the girls basketball coach at IMG Academy, located in Bradenton, Florida. While at IMG Academy, DèRontè was the head coach of the Academy Varsity team and assisted with the Girls National and Women’s Post-Graduate teams. During his tenure at IMG Academy, he trained and coached players at all skill levels, including many who graduated IMG Academy to become student-athletes at NCAA Division I schools.

Prior to IMG Academy, DèRontè served on the staff at Bryan College, located in Dayton, Tenn. During his lone season at Bryan, the Lady Lions went 20-11, compiling the most single-season wins and highest conference finish than the prior seven years. Coach Polite directed all facets of skill development for the program and served as the head coach of the Lady Lions JV program.

That followed a two-year stop as the head women's coach and assistant athletic director at Central Christian College of the Bible (CCCB). During his tenure at CCCB, he led the Lady Saints to the first two winning seasons in school history, compiling 37 victories.

He also played at CCCB, serving as a team captain from 2007-2009. As a player, DèRontè was an integral member of the 2008-2009 team that achieved the first 20-win season in men's basketball history – capped with a second place finish in the ACCA National Tournament. He was named the ACCA National Player of the Year twice, was a two-time NCCAA D-II All-American, two-time NCCAA Academic All-American, as well as holder of the men’s basketball single-season scoring record with 833 points.

Coach Polite graduated CCCB with a Bachelor of Religious Studies, and prior to that graduated from North Carolina Agricultural & Technical State University, with a Bachelor of Science in Economics. He also earned a Master of Education in Educational, School, and Counseling Psychology with an emphasis in Positive Coaching from the University of Missouri.

Polite is married to wife, Sarah, and has three children, daughters Zion (11) and Mazie (4) and son Brody (2).