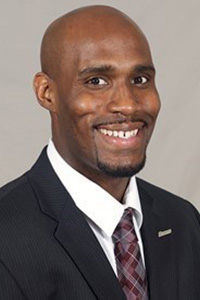 Terrance McGee begins his third season as an assistant coach for the Milwaukee men's basketball team in 2019-20.

McGee joined the Panthers following six seasons as an assistant at Southern Illinois University. While with the Salukis, he played a key role to the team’s rise to 22 victories in 2016 and has proven himself as a strong recruiter in the St. Louis area, helping develop all-conference SIU guards Desmar Jackson and Anthony Beane Jr.

“I am proud to welcome Terrance and his family back home and to the Milwaukee Panther family,” head coach Pat Baldwin said said at the time. “Terrance has great knowledge and understanding of the Milwaukee and Wisconsin high school basketball landscape, which is the base of our recruiting efforts. Terrance is a very good role model for our young men and will help develop them on and off the court.”

Prior to Southern, McGee served two seasons as an assistant coach at Grand Valley State University, during which time the Lakers compiled a 33-21 record, including a 19-8 mark and third-place finish in the Great Lakes Intercollegiate Athletic Conference in 2011.

Prior to MSU, he spent two years at Kirkwood Community College (1999-2001). After his college career, McGee played professionally overseas for seven years.

A native of Milwaukee, Wis., McGee earned his undergraduate degree in hospitality and restaurant administration at MSU.