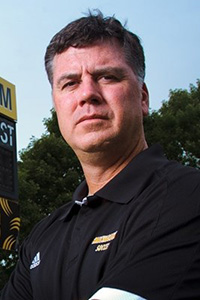 Kris Kelderman was named the seventh head coach in Milwaukee program history in May of 2012. It didn't take him long to make an impression with the Panthers, posting the first winning regular season for the team in seven years in his initial campaign in the fall of 2012.

The team came oh-so-close to a return to the Horizon League Tournament championship game in 2018, taking No. 18 Wright State to overtime on the road before falling in a penalty-kick shootout in the semifinals after a 1-1 draw. That capped a 9-7-3 campaign, which included a victory over Ohio State as well as a 2-0-1 mark against in-state schools (2-1 over Marquette/1-0 over Green Bay/1-1 against Wisconsin), helping keep the "Milwaukee Cup" and "Chancellor's Cup" back on Milwaukee's campus.

The 2017 campaign finished at 10-5-4, the third year in a row the squad posted a higher victory total. The Panthers led the Horizon League in goals (31), assists (29) and points (91) and were second in goals-against average (0.943) on defense. The team spent nearly a month in the regional rankings and also won six conference games in a row for the first time since 2002.

He directed one of the youngest teams in the nation in 2015 – the Panthers had 14 freshmen and 21 total underclassmen on the roster – to mark the third-youngest team in the country. They competed each and every contest, with all but one of their losses on the year coming in a one-goal game and four going to overtime. That upward trend continued in 2016, as the team went 5-3-1 in league play and advanced to the semifinals of the Horizon League Tournament. Again, all but one loss on the season was a one-goal setback, with the Panthers spending time in the NSCAA regional rankings over the course of the campaign.

He enjoyed great success in 2013, guiding his team to a 15-3-2 record during the campaign, capped by the ninth NCAA Tournament appearance in program history. A 2013 WSA College Coach of the Year nominee, his turnaround of the program has been steady. The 15 victories in 2013 marked the most for UWM since 2003. They have also been very tough to beat at Engelmann Stadium under his watch, posting a 29-14-10 mark (.642) in that span.

UWM got off to a fast start in 2014, going 3-1 through four games to earn a regional ranking before injuries took their toll. The team was prolific on both sides of the ball in 2013. The offense led the Horizon League in nearly all categories, finishing 13th in scoring and 16th in total goals at the NCAA Division I level. It was just as good on defense, setting a school record with a 0.63 goals against average - breaking the mark of 0.67 set in 2002 - in ranking seventh in the NCAA in team GAA and 11th with its 10 shutouts.

The team got off to the second-best start in program history, posting a 9-0-1 record in the first 10 games before an overtime loss ended the streak. That stretch helped the Panthers earn their first national ranking since 2003, peaking at third in the region and 24th in the NSCAA (National Soccer Coaches Association of America) poll the week of Oct. 7.

He directed the team to an impressive 6-1 record at Engelmann Stadium his first season and helped the squad earn a spot in the NSCAA regional poll for the first time since 2005. Four players earned Horizon League postseason honors - the highest number in six years - as the team finished 8-8-2 overall.
Kelderman came to Milwaukee from Green Bay, where he spent the 2011 season as the head coach of the Phoenix. Prior to his time in Green Bay, Kelderman served four seasons as an assistant coach in MLS and two stints as an assistant coach at George Mason. He also played four seasons in MLS and a total of nine seasons in pro soccer.

A Neenah native, Kelderman was a two-time state champion and the Wisconsin Gatorade Player of the Year in 1986 at Neenah High School while playing for his father, Harry. He actually won championships as a player at the high school, college and professional levels and was inducted into the Wisconsin State Soccer Association Hall of Fame in March 2010.

"I am very excited. This is a great opportunity to step into a program with great history and tradition," Kelderman said. "It is also an opportunity to step in at a time where there is a little bit of rebuilding that needs to go on, but I am ready for the great challenge and we will prevail. I am looking forward to bringing back the glory days of UWM soccer."

Kelderman is the seventh head coach in UWM men's soccer history, taking over a program that has made eight NCAA Tournament appearances but had not played in the postseason since 2005.

"Everything is there," Kelderman said. "The program has had a lot of success, there is a great facility in Engelmann, a great city and the school has a tremendous reputation. I am looking forward to getting the ball rolling and making everyone involved and invested in the program extremely proud."

Kelderman's coaching career is highlighted by four seasons as the top assistant for two different teams in MLS. He worked with the Kansas City Wizards from 2007-2009 and then spent the 2010 season with D.C. United. His time at George Mason included an NCAA Tournament appearance and top-25 ranking in 2005-06 and a second stint at the school before becoming the head coach at Green Bay.

Kelderman guided Green Bay to an 11-7-1 record in 2011, making him just the third coach in Phoenix history to have 11 wins or more in their first season at the helm. Kelderman also helped Tony Walls to Horizon League Player of the Year honors and played a major role in helping Walls become the first player in Phoenix history to sign a professional contract with an MLS team.

Kelderman's professional playing career lasted nine seasons. He spent a total of four seasons with three teams in MLS, winning back-to-back championships while playing for D.C. United in 1996 and 1997. He then moved on to play for the Miami Fusion in 1998 and the New England Revolution in 1999. His pro career also included time with Milwaukee Rampage (1993-95, 2000) and Milwaukee Wave (2000-01) as well as stints with the St. Louis Ambush, Tampa Bay Terror, Buffalo Blizzard and Baltimore Blast.

Kelderman was a two-time All-Atlantic Coast Conference performer at the University of Virginia and helped the Cavaliers win the national championship in 1989. He closed out his career in the top-10 in both career points and assists in Virginia's record books. Kelderman also played on the Under-17 United States National Team in the U17 Youth World Cup in 1985.