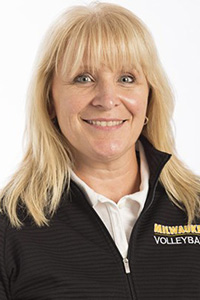 Johnson was named head coach in May of 2007 after 10 years as an assistant and associate head coach at Milwaukee. All she has done since is lead UWM to 198 wins, five regular-season titles, four league-tournament crowns and four NCAA Tournament berths.

The past three seasons have seen Johnson with one of the youngest rosters not only in the Horizon League, but also in the nation. Never one for excuses, Johnson still coached her young squads to a combined 35 wins over that span. Despite their youth, Johnson again also helped her players reach an impressive amount of accolades, earning a total of eight league honors, including three named to the all-freshman team and the Horizon League Freshman of the Year in 2016.

In 2014, Johnson led her team to a second-place finish in the regular season despite a slew of injuries and challenges. The Panthers made it all the way to the Horizon League Tournament Championship match before coming up just short of its fifth NCAA Tournament bid with Johnson at the helm.

That comes on the heels of a very impressive 2013 campaign in which Johnson was named coach of the year for the fifth time overall. She led the Panthers on the path to a remarkable turnaround, going from an injury-plagued, seventh-place finish in 2012 to a ninth regular-season title in 11 years.

Her overall run has included the first undefeated Horizon League season in 17 years, a school-record 18-match winning streak and the program's best-ever NCAA Tournament performance - a heartbreaking five-set loss to Dayton in 2009.

The 2011 season may well have been her best. The Panthers went 25-5 overall and UWM went 16-0 in league play, becoming the first Horizon League team to go through the league schedule without a loss since Notre Dame did it in 1994. Milwaukee also set a school record with 18 straight wins and nearly upset Iowa State in the first round of the postseason.

One season earlier, she led the Panthers to a 15-1 league mark and an 11-match winning streak. In fact, UWM started the season 3-7 against a difficult non-league schedule but then won 17 of 19 matches after that, capturing the league crown.

In 2008, Johnson directed a squad that included 12 freshmen and sophomores to the top of the league standings. UWM also beat then-#18 Iowa State during non-league play and claimed the Horizon League Tournament title and automatic berth into the NCAA Tournament. During her first season as head coach, Johnson led the Panthers to a school-record 26 wins and a fifth-straight Horizon League regular season title. UWM also put together winning streaks of 14 and 12 matches.

UWM has won either the regular season or tournament championship in league play in 16 of the 22 seasons Johnson has been on the staff at UWM, while 10 of the last 21 Panther squads have qualified for the NCAA Tournament. In fact, UWM has staked its claim to clearly being the top volleyball program in the Horizon League. The Panthers have won a league-record seven league tournament titles while Milwaukee has gone 254-102 in Horizon League play since joining the conference (then the MCC) in 1994.

Johnson's efforts on the recruiting trail have led to eight league newcomers of the year during her tenure, including Rachel Neuberger in 2009 and Bridget Wallenberger in 2016. Plus, 22 Panther players have earned a spot on the league's all-newcomer team in the last 22 years. Panther players have then consistently developed into the best players in the Horizon League. In her 22 seasons in Milwaukee, Johnson has coached 10 League Players of the Year, with Kerri Schuh winning the award twice and Neuberger claiming the distinction in 2013.

Johnson's playing background is at setter, where she earned All-Big Sky and All-Northwest Region honors at Idaho State. She was also a two-time Academic All-Big Sky honoree and has helped direct the Panthers to great success in the classroom, with two Academic All-Americans and a team GPA above 3.3.

A native of Racine, Johnson joined the Panther staff after serving as an assistant coach at Indiana State. She also worked at Idaho State and was head coach at UW-Parkside. She lives in Racine with her husband, C.J., son Ty, daughter Josie and stepson Brody.