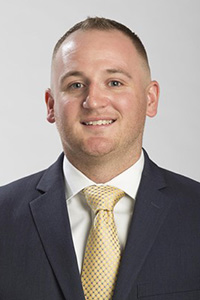 Andrew Jedlicka was promoted to Associate Athletic Trainer in the summer of 2019. Jedlicka was hired in November of 2016 and works primarily with the UWM men's basketball and women's tennis teams. He also serves as the insurance coordinator for the department and was the Interim Director of Sports Medicine during the 2018-19 school year.

Jedlicka earned his athletic training bachelor's degree in 2010 and his post professional master's degree in athletic training in 2013, receiving both degrees from UNI. A native of Tipton, Iowa, Jedlicka also served as a conditioning coach and assistant athletic trainer for the Williamsport Crosscutters, a minor league affiliate of the Philadelphia Phillies, from March 2010 to September 2011.