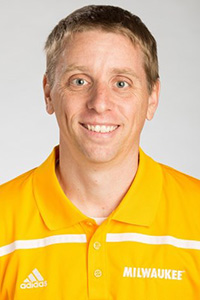 Todd Hill - a 2017 inductee in the Bud K. Haidet Milwaukee Panther Hall of Fame - enters his 17th season as Milwaukee' diving coach since coming back to Milwaukee following an illustrious diving career with the Panthers.

Hill earned the ultimate honor, being named to the Bud K. Haidet Hall of Fame in December of 2017 for his athletic and coaching efforts.

Hill continues his stellar and award-winning coaching run, earning Horizon League Diving Coach of the Year honors seven times in the past 13 years. Over the past 13 seasons, his divers have combined to earn a whopping 72 Horizon League Diver of the Week honors, advancing to NCAA Zone Diving competition 21 times.

The 2016-17 season was nothing new for Hill. Despite a younger roster, his divers garnered another four league diver of the week honors. That carried over into the league championships, taking a combined five first-team honors.

The 2015-16 team was yet another in a strong run for Hill. He was again named Horizon League Diving Coach of the Year after guiding senior Rachel Margis to a sweep of both boards at the league meet and a new school record in the process. Margis was also named league diver of the year - the fourth-straight year a Panther diver has earned the league's top honor.

That marked the fourth-straight year Hill was named the league's top diving coach and the eighth time overall in his career.

2014-15 was yet another one for the record books for Hill. He coached K.J. Heger to his third-straight Horizon League Diver of the Year award; the first time that award has been one by one person three-straight years. Heger also swept both boards at the league meet to lead a solid group of Milwaukee divers at the championships. Heger also was named league diver of the week an unprecidented nine times last season, while UWM divers earned the league honor an outstanding 13 times overall on the year.

Hill was named the Horizon League Diving Coach of the Year on the men's side for the third-straight year.

In 2013-14, Hill was again named league coach of the year after helping Heger repeat as a league champion on the three-meter board while finishing all-league second team on one-meter.

The 2012-13 season was a special one for Milwaukee diving. Hill coached some outstanding performances on the men's side. Heger broke his own school record on both boards and was named diver of the year despite battling an injury suffered early in the season. Milwaukee really showed its depth that year as they had five total divers compete in the A-finals at the league meet, helping Hill earn Men's Diving Coach of the Year.

He coached Kelsey George to second team all-league honors on both boards in 2009-10 and helped the women to league championships on each in 2008-09, with Ashley Hall (3-m winner) and George (1-m champion) sharing Horizon League Diver of the Meet honors. His women's squad dominated the league meet, placing four divers in the top six on both boards.

He led a team effort in 2007-08, placing seven divers in the top 10 on the one-meter board and seven in the top nine on the three-meter. Hall led the way after finishing second (1-m) and third (3-m) overall.

Hill had the women's league diver of the meet for the third-consecutive year in 2006-07, guiding Crystal Szymanski to the honor after claiming a league title on the one-meter board and second place on the three-meter board, despite her missing well over half the season to injury before coming back. In addition, Emily Duesler claimed All-Horizon First Team honors on the three-meter board.

In becoming the Panther diving coach, Hill had added to an already impressive list of credentials that includes coaching many young athletes to the Junior Zone competition and coaching one Junior National Champion. He has also instructed six high school state champions, numerous high school All-Americans and has led many athletes to become finalists in state competition.

Besides being considered one of the best diving coaches in the league and area, Hill had a distinguished diving career at UWM. He won Midwest Collegiate Conference Championships three times and was a four-time NCAA Zone qualifier. He was named the MCC Diver of the Year in 1999 and 2000. Hill graduated from UWM in the spring of 2001 with a bachelor's degree in psychology.