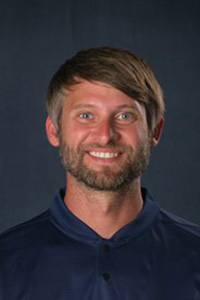 Aaron Haselhorst was named the new Assistant Athletic Director of Sports Medicine for the Milwaukee Panthers in the spring of 2019.

Haselhorst comes to Milwaukee after being the Assistant Athletic Trainer at Creighton University since 2015.

"We feel very fortunate and excited to have Aaron joining us to direct the Milwaukee Department of Sports Medicine," Athletic Director Amanda Braun said. "We view Aaron as the perfect fit to be the leader in providing our student-athletes with the most comprehensive sports medicine and care available. He rose to the top of an impressive group of finalists based on his extensive knowledge and experience."

Haselhorst has been at Creighton since February of 2015 as an assistant athletic trainer, with his primary sport coverage coming with men's soccer program as well as both golf teams.

He has additional experience as a member of the NCAA Men's Basketball Tournament Medical Staff (2015/2018) and with the College World Series Medical Staff (2015-18). In addition, during the summer and fall of 2007, he completed an internship with the New England Patriots.

Originally from Norfolk, Nebraska, Haselhorst earned his Bachelor of Science degree with an Emphasis in Athletic Training from the University of Nebraska at Omaha in 2006 and his Master of Science Degree from Eastern Illinois University in 2008. He is certified as a professional rescuer with the American Red Cross as well as a certified member of the National Athletic Trainers Association.