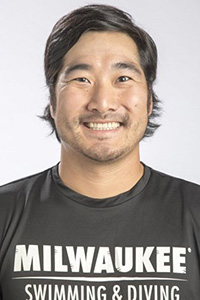 Alex Hallam begins his second season as an assistant coach for the Milwaukee swimming & diving team in 2019-20.

Hallam came to Milwaukee with over six years of coaching experience and over 14 years devoted to the sport.

Most recently, Hallam worked as a coach in the Milwaukee area. He spent over three years working with the Schroeder Swim Team in Brown Deer, coaching a large number of swimmers ranging in age from 6-years to 22-years-old. Hallam In addition to a large number of responsibilities, Hallam coached a number of individuals to state championships.

Also in the area, Hallam spent the past year as the head coach at Greendale High School. In just his first season, he led the Panthers to a third-place finish at sectionals and coached four individuals to berths to the WIAA State Championships.

Prior to that, Hallam spent two years as the senior assistant coach for the Southwest Aquatic Team in Muskego.

Hallam is very familiar with the Horizon League, as he graduated from Green Bay and was a four-year swimmer for the Phoenix. He swam distance free, IM and backstroke events with the Phoenix and was named a team captain as a senior. He was also voted as the president of the Student-Athlete Advisory Committee (SAAC) while at Green Bay.

Hallam graduated from Green Bay with degrees in Psychology and Human Development.