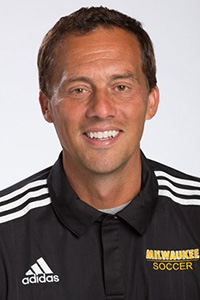 The 2019 season will be the fifth for Troy Fabiano as the Milwaukee women’s soccer coach.

Fabiano continues to set the bar higher each year, compiling a record of 56-10-11 while claiming four straight Horizon League regular-season titles on the strength of a 32-1-3 mark in league play. His 56 victories are the most-ever for a Milwaukee head coach in their first four seasons, easily outdistancing the former high-water mark of 45.

The Horizon League Coach of the Year for the fourth-straight time – the first conference coach to accomplish that feat since 1991-94 – led the Panthers to a 16-2-1 ledger in 2018, including an unblemished 9-0 mark in conference play. The campaign culminated in a Horizon League Tournament championship and the program’s 12th appearance in the NCAA Tournament.

Included in that span was a 27-game unbeaten streak (23-0-4), a stretch that more than doubled up the former school mark of 13 and also established a new Horizon League mark, eclipsing the 24 (23-0-1) set by Notre Dame back in 1994. The mark finds a place in the history books as well, going down as the 12th-longest unbeaten streak in NCAA history.

The Panthers again topped the Horizon League in nearly all categories last fall, leading the way in points with 124 (second was 84), goals with 39 (second was 30) and assists with 46 (second 33). Defensively, the squad also topped the charts in goals-against average at 0.72 (second was 0.91).

That followed an unprecedented unbeaten season in 2017, finishing 16-0-4 as the nation’s lone unbeaten squad. Milwaukee again led the Horizon League in virtually every category, finishing second in the NCAA in goals-against average (school and Horizon League record 0.285), second in assists (61), fifth in points (151), third in shots per-game (19.8) and 10th in scoring offense (2.25). The Panthers played in the Horizon League Tournament championship for the second year in a row.

He led a squad that topped the Horizon League in points, goals, assists and shots on offense and shutouts and goals-against average on defense in 2016, coming up just short of a return to the NCAA Tournament after a tough loss in the title game.

In 2015, he quickly turned around a team that won just six games the year prior to his arrival and was picked to finish eighth in the preseason poll. He nearly doubled that win total, with his team finishing 11-3-4 overall, including an unbeaten 8-0-1 mark in league play that included the regular-season crown.

That title put the Panthers back on top of the conference for the 15th time in the past 16 seasons, led by a defense that topped the Horizon League with its 0.69 goals-against average and nine shutouts. Seven different players went on to earn Horizon League postseason honors.

Fabiano came to Milwaukee following 17 years as the head women’s soccer coach at the University of Wisconsin-Parkside, where he compiled a remarkable .770 winning percentage and boasted a 222-74-29 record.

“We are very excited to have someone with Troy’s tremendous experience join our team,” Director of Athletics Amanda Braun said at the time of Fabiano’s hire. “He is a great coach and recruiter and he is a proven winner. We’re looking forward to having him in Milwaukee working as an educator and leader for our young women.”

Fabiano became the eighth coach in Milwaukee program history, and took over a program that made 11 NCAA Tournament appearances, won 15 regular season league titles and claimed 10 league tournament trophies prior to his arrival.

“I’d like to thank Amanda Braun, Kathy Litzau and the entire search committee for entrusting me with the opportunity to lead the Milwaukee women’s soccer program into the future,” Fabiano said. “It’s a great opportunity for me and my family. Throughout the process, I was really impressed with everybody in the athletic department and their vision for the program moving forward.

“It was very noticeable how tightly knit the Panther community is and the support the coaches have to be successful, both on and off the field.”

Fabiano guided Parkside to 16 consecutive winning seasons, eight NCAA Tournament appearances and five Great Lakes Valley Conference championships. He earned three GLVC Coach of the Year awards, and was named the Midwest Region Coach of the Year in 2008, 2010 and 2014.

During his time with the Rangers he helped coach seven All-Americans, including one Capital One Academic All-American First-Team selection in 2014.

Fabiano guided Parkside to another memorable season his final year, finishing with an 18-1-3 record and a berth in the NCAA Sweet 16 before falling to the eventual national champion in overtime. The Rangers were also ranked as high as No. 3 in the nation during a 2014 campaign that saw them clinch both the GLVC regular season and tournament titles. His team also boasted the best goals-against average in the nation that season, yielding just 0.265 per game.

Fabiano began his coaching career as a men’s assistant at his alma mater, Robert Morris. He then went on to become the interim head men’s coach at NCAA Division I Eastern Illinois, before returning to his hometown of Kenosha to take the assistant position with the Parkside women’s program in 1996. After one season, Fabiano was promoted to head coach and he led the Rangers to the GLVC’s Final Four in just his third year at the helm and to the league championship game one season later.

Fabiano had a superlative playing career before going on to be a highly successful coach. He played locally at Kenosha Bradford High School before earning a scholarship to play soccer at Robert Morris University. While with the Colonials, Fabiano was member of the All-Northeast Conference first team all four years. He was the Northeast Conference Player of the Year and finished 10th in the nation in scoring as a senior.