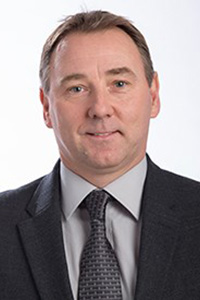 Doffek became just the second coach in program history to top 300 career wins in 2017, becoming the program leader with victory No. 348 in March of 2019.

The Panthers posted a runner-up finish in the Horizon League regular season and tournament in 2019, finishing in the Top 25 in the NCAA in numerous categories, including batting average, hits, doubles and runs-per-game. Two players – Jake Sommers (Round 10/St. Louis) and Trevor Schwecke (Round 13/Toronto) – were selected in the 2019 Major League Baseball Draft.

The pair make it nine MLB-draftees in the past five years under Doffek and 23 in school history. In fact, Doffek has now coached a list of 47 players that have been either drafted by Major League Baseball or signed by professional teams.

He added 26 wins to his career total in 2018, with his team coming up one victory short of a spot in the Horizon League Tournament title game. Seven players earned postseason league honors and Austin Schulfer was selected in the MLB Draft.

Four players earned All-Horizon League honors and two more players - Daulton Varsho and Adam Reuss - were selected in the MLB Draft in 2017. At pick No. 68, Varsho became the highest-drafted player in program history, as well as the second-highest Horizon League player ever selected when the Arizona Diamondbacks tabbed the All-American junior.

He led the team to 32 victories in 2016, the first back-to-back seasons of 30-plus wins since 2001-02. Picked fourth in the preseason poll, the Panthers finished second behind the efforts of Horizon League Player of the Year Daulton Varsho and Horizon League Pitcher of the Year Brian Keller. Keller went on to be drafted by the New York Yankees. The squad also reset program records for stolen bases and strikeouts by the pitching staff for the second year in a row.

The program enjoyed a record-breaking season in 2015, tying the school record along the way with an impressive total of 39 victories. The team broke records for strikeouts by the staff as well as offensive records that stood the test of time when they reset standards for stolen bases (last established in 2001) and triples (1997). The pitching staff recorded the second-best ERA in program history and the Panthers tied a school mark with 17 wins at home. And it all came in a campaign that ended just one win shy of a trip to the NCAA Tournament, falling in the Horizon League Tournament Championship.

Doffek saw three of his players get selected in the 2015 MLB Draft for the second time in program history when Justin Langley (Miami Marlins/16th round), Sam Koenig (Los Angeles Angels/27th round) and Mitch Ghelfi (Milwaukee Brewers/28th round) were all chosen. In addition to the three players drafted, the team also had two more sign professional contracts.

Milwaukee got off to a school-record 10-4 start in 2015, posted its first weekend sweep of an SEC opponent, knocked off a nationally-ranked team for the first time since 2009, threw its first-ever no-hitter and had a conference-high nine players get recognized by the Horizon League with postseason honors.

Milwaukee battled injury and the weather in 2014, finishing with more than 20 victories once again despite all the adversity. The Panthers opened 2014 with four straight home wins, extending a winning streak in Milwaukee to 20 before it was snapped, just one victory away from the school record of 21 wins in a row at home set in 2010.

The Panthers claimed the Horizon League regular-season title in 2013, riding a strong offense that led the league in batting average, slugging percentage, on-base percentage, runs, hits and RBI while also recording the second-best ERA in the conference and the lowest opponent batting average. They went undefeated at home for the first time in program history and ended the season with the longest active winning streak at home (16 games) at the NCAA Division I level.

The team had the Horizon League Player, Pitcher and Newcomer of the Year on its roster and ended the season with the league's leading hitter as well as five of the top 10 batters in the conference. Doffek ended up as the 2013 Horizon League Coach of the Year for his efforts.

Then, in the MLB Draft in June, Josh Uhen was selected by the Milwaukee Brewers in the fifth round - making him the highest-ever draft choice in program history at the time as well as the fifth player to be selected by a Major League team between 2011 and 2013.

The 2012 campaign saw the Panthers end the regular season on a high note - winning nine of their final 10 games - but they were eliminated in the third game of the league tournament in extra innings. The pitching staff set a program record with a 3.73 ERA, seven regulars batted over .300 and five players earned Horizon League postseason honors - including three first-team honorees.

Following the season, Doffek saw three of his players chosen in the 2012 Major League Baseball Draft - the first time in program history that more than one Panther was selected - with Jordan Guth (Philadelphia Phillies; ninth round), Eric Semmelhack (Milwaukee Brewers; 12th round) and Paul Hoenecke (Los Angeles Dodgers; 24th round) all hearing their names called on draft day.

The Panthers battled injuries and adversity in 2011, losing several starters and a handful of pitchers to injury. Despite that, they won 21 of their final 31 games of the regular season, finished second in the league in ERA and had just one fewer victory in league play than the first-place finisher. Three players earned All-Horizon League First-Team honors, including league pitcher of the year Chad Pierce, who was selected by the Milwaukee Brewers in the 2011 MLB Draft.

The 2010 season was a memorable one, as the team won the Horizon League Championship and advanced to the NCAA Tournament for the fourth time, winning 25-plus games for the 13th time in the past 14 years.

The squad had a memorable run to the crown, going 4-1 while riding strong pitching to the championship. The team recorded a 2.66 ERA in the five games, limiting opponents to just a .247 batting average. Eight players earned all-league honors, with Chad Pierce earning the Horizon League Newcomer of the Year award and Cameron Amsrud the Horizon League Relief Pitcher of the Year honor. The team led the league in earned run average and was second in batting, while also setting a school record with 21 wins in a row at home.

Doffek was named Horizon League Coach of the Year in 2009 after leading the Panthers to a second-place finish in the league standings. His team had a league-high four first team all-league selections and set a school record by going 14-1 at home. He won 78 games in his first three seasons, a school record, after already establishing marks for most victories by a first-year head coach (25) and most after his first two seasons (50). He was rewarded with a new three-year contract following the season.

The 2008 campaign ended just one victory away from the Panthers making their first trip to the NCAA Regionals since 2002, with UWM falling to UIC in a one-game, winner-take-all, title contest. Milwaukee rode three upsets and a potent offense to the title game, batting .347 in the six games, averaging almost nine runs and 14 hits per contest.

Eight players earned postseason honors from the Horizon League and the offense ended the season ranked 73rd in the NCAA with its .309 batting average. Its 412 runs scored led the Horizon League and ranked 67th in the country. Its 672 hits were second all-time in program history, led the league and ranked 16th in the country. The Panthers were a doubles machine, recording 156 two-baggers to smash the old school record of 143 and end the season ranked No. 2 in the NCAA.

Six regulars batted over .300 in 2007, including two finishing in the top 10 in the league. His team also reeled off the longest winning streak since the 2001 season (eight games) and set a program record when it scored more than 10 runs in seven consecutive games in May, breaking the old standard of five-straight 10-plus run outings.

After a slow start where the team played series against nationally-ranked Arkansas and Kentucky and also against eventual NCAA-Tournament participant Austin Peay, the Panthers righted the ship to go 23-15 the rest of the regular season. After posting two postseason victories, they had their season come to a heartbreaking close in extra innings of the semifinals at the Horizon League Tournament.

Doffek was named the seventh head coach in the history of the Milwaukee baseball program on Sept. 25, 2006.

As the assistant head coach in the past, he worked primarily with the team's hitting and defensive units while also serving as the lead recruiter and overseeing the day-to-day operations of the program. The 2006 season - his last as the assistant – was a memorable one, as the Panthers won 30-plus games for the sixth time since UWM moved to the NCAA Division I level in 1991, going 32-25 overall.

Doffek led the offense to great heights, with seven regulars batting over .300, paced by All-American outfielder Mike Goetz. Doffek helped guide Goetz to a .493 average on the season - the highest in the nation - in addition to hitting streaks of 32 and 27 games and team records in seven categories. Goetz went on to be drafted by the Milwaukee Brewers.

As a team, the Panthers batted .324, the 16th-best average in the nation. His squad also ranked among the national leaders in doubles (third at 2.51 per game), slugging percentage (18th at .488), triples (35th), and runs (48th). MKE set a team record in doubles (143) and ended in the top five in the record book in numerous categories: average (third), runs (third), hits (second), triples (second), runs batted in (third), total bases (third) and home runs (fifth).

During Doffek's time at Milwaukee, he has been instrumental in the Panthers' rise to a league and regional power. Since his first season in 1995, the Panthers have reset every offensive record and set school marks for wins and winning percentage multiple times.

Doffek's influence reached a national level in 1999 when Milwaukee upset No. 1 Rice University during the program's first appearance in the NCAA Tournament. Doffek, along with Jerry Augustine, was named the 1999 Wisconsin Baseball Coaches Association (WBCA) Co-Coach of the Year. In 2001, the Panthers' offense ranked second in the nation after hitting a school-record .352 as a team. Together, Milwaukee saw all 10 regulars bat above .300 and five hit over .350. The team was led by a pair of players that hit over .420, including Scott Gillitzer's then school-record .424 average.

Before joining the coaching staff, Doffek spent five seasons (1989-93) in the Los Angeles Dodgers minor league system, making it to the Triple-A level with the Albuquerque Dukes.

Collegiately, Doffek played baseball at Waukesha County Community College, where he won the NJCAA batting title after hitting .539 as a sophomore. He was honored as an all-region and all-conference selection. Doffek attended Hartland Arrowhead High School, where he was selected to all-state and all-conference teams. He also played football for three years.