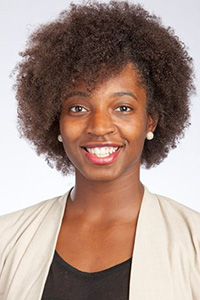 Anya Covington begins her fourth season as an assistant women's basketball coach for the 2019-20 season.

In her first two years on campus, Covington already made a big impact by helping the Panthers tie the program record with 22 wins in year one and following that up with 21 wins last season. Milwaukee also reached the postseason each of those seasons, winning their first ever Postseason WNIT contest this past season after advancing to the WBI semifinals two years ago.

Covington played an instrumental role with the Milwaukee coaching staff this past season. She helped the Panthers lock down defensively for one of their best seasons in program history, limiting opponents to just 60.1 points/game last year.

Several individuals have earned All-Horizon League honors with her help. Last season, Ryaen Johnson was named to the All-Defensive Team while Megan Walstad earned All-Freshman team honors. Johnson shattered the school record with 76 blocks, ranking 20th in the nation. The previous year, she helped seniors Steph Kostowicz and Jenny Lindner earn All-Horizon League honors, with Kostowicz breaking the then school records for blocks in a single season (61) and career (174). As a team, the Panthers recorded back-to-back record breaking seasons. Milwaukee shattered the program record for blocks in a season in 2017-18 with 124 and proceeded to break it again in 2018-19 with 161.

Covington came to Milwaukee after one season at UW-Madison. Prior to coaching the Badgers, Covington spent the 2014-15 season as an assistant coach with the University of Evansville. While with the Purple Aces, Covington helped coach forward Mallory Ladd to a spot on the 2015 Missouri Valley Conference All-Tournament team to go along with honorable mention all-conference honors.

Following her playing career, Covington started out her coaching profession as a graduate assistant coach for Northern Illinois in 2013-14.

Covington was also a standout on the court. Playing collegiately for Wisconsin, she appeared in 123 games in her four-year career and served as a captain her sophomore, junior and senior seasons with the Badgers. Covington was named honorable mention All-Big Ten as a senior after averaging 10.3 points and 6.4 rebounds per game. In addition, Covington was a two-time recipient of the Big Ten Sportsmanship Award, as well as serving on the NCAA Division I Women’s Basketball Issues Committee.

After graduation, Covington continued her playing career in the professional ranks overseas on a USA team against Ukraine and Moldova while ministering to those areas through Athletes in Action. She averaged 13.6 points, 10.3 rebounds and 1.8 blocks per game with the DBBL Rhein Main basketball team before suffering a season-ending injury. She also coached two professional teams while playing, assisting both the Rhein Main U17 and U13 clubs in Germany to winning seasons.

A native of Edwardsville, Ill., Covington graduated from Wisconsin in 2012 with a degree in English.