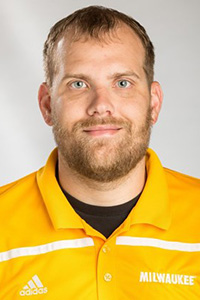 Entering his 10th season as Milwaukee's head men's and women's swimming and diving coach in 2019-20, Kyle Clements has led the Panthers to unprecedented heights.

Clements was promoted to head coach in the fall of 2010 after two years as the top assistant.

In his first nine years at the helm, Clements has done nothing but completely reshape Milwaukee's history, bringing home an unprecedented 12 team trophies - four Horizon League Championships and seven runner-up finishes - over that span.

MKE has also had a boat load of individual success, breaking all but two of the combined 72 school and freshman records have been broken during Clements' time at Milwaukee.

This continues a trend of success in the pool for the Panthers since Clements came to campus. The 2014-15 season was capped by yet another impressive showing, leading both the Milwaukee men's and women's programs to Horizon League Runner-Up finishes. The Panther women posted their second-straight second-place showing and their fifth top-two finish in the past five years. Meanwhile, the UWM men finished league runners-up despite a 4-7 dual record on the year.

The 2013-14 season proved to be yet another for the record books for UWM. The women's squad came in second overall in one of the narrowest finishes in league history. Milwaukee also boasted unprecedented success at the NCAA Championships, finishing in 26th place with 29 points, the most ever scored by a Horizon League school at the national meet. Emily McClellen finished second overall in the 100 breaststroke with the second-fastest time in collegiate history in her event.

The Milwaukee men's team also had an impressive year in the pool. Despite graduating an impressive and deep senior class from the 2011-12 season, the Panthers broke five more school records and another two freshman top times en route to a runner-up showing at the league championships.

The 2011-12 season proved to be one of the most memorable across the board in program history. Clements led the men's team to its third-consecutive title at the Horizon League Championships with a record-setting margin of victory, while the women also won the league crown that March for just the second time in school history. Clements was named Horizon League Coach of the Year on both sides, the third time he won the award after just his second season.

That season marked the only time in program history Milwaukee swept both Horizon League titles.

The men's team dominated every time they entered the pool, starting off with the team's first-ever win over in-state rival Wisconsin in the season-opener. That victory set the tone as Milwaukee then cruised through the rest of its schedule to just its second undefeated season in school history, finishing an impressive 10-0 before taking the conference title.

The women's team also had a truly remarkable season, capped by their second Horizon League title in school history and the first since 2001. Clements saw McClellan post two NCAA 'A' cut times, a first for the Horizon League that automatically qualify an individual for the NCAA Championships.

McClellan was also one of three Panthers to swim at the U.S. Olympic Trials that summer, just missing a trip to London after an incredible sixth-place finish in the 100 breaststroke.

In 2010-11, Clements was named head coach after two years as the top assistant and immediately produced a champion. In just his first season at the helm, he led both the men's and women's teams to an impressive 10-3 overall record, with the men winning the Horizon League Championship for the second-straight season. Clements also was named the Horizon League Coach of the Year for men's swimming in just his first year on the job.

The incredible achievements by the team have rewritten the record book, as 46 total records were eclipsed 68 different times in just his first year at the helm.

"Each athlete here has their own personal goals, but each person's number one goal is a team championship," Clements said. "This is an attitude that we will take into each practice, meet, and into the weight room. Personal success is very important, but each member of this program has committed themselves to that goal. When you make that commitment to something bigger than yourself and you do all that you can to reach it, no matter what the final conference place is, you're going to be a champion."

Clements came to Milwaukee from Marshall University, where he served as the volunteer assistant coach for the women's swimming & diving team in his last season.

Clements earned his undergraduate degree in aquatics from Ball State in 2007, while also minoring in teaching aquatics. He spent four years as a student assistant coach for the Ball State swim team while earning his degree.