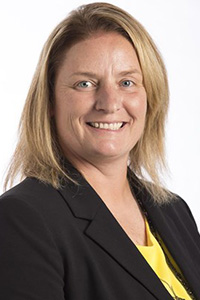 Stacy Cantley has been hired as an assistant basketball coach with the Milwaukee women’s basketball team heading into the 2018-19 season.

Cantley – who brings over 20 years of coaching experience – comes to Milwaukee after spending her last three years at Western Carolina.

“Stacy brings a wealth of experience to our young team and is someone that I sincerely trust in the coaching world,” Rechlicz said. “She will be a tremendous asset to strengthening our player development and in game-strategy. She has also worked under a variety of head coaches and will be a great resource to us as we continue to build our legacy. I look forward to watching our student-athletes grow under her leadership.”

Prior to her time with the Catamounts, Cantley spent four seasons at Wisconsin. While with the Badgers, she spent her first season on the bench alongside Rechlicz in 2010-11. She also coached current Panther assistant Anya Covington for two seasons, helping her earn All-Big Ten honors as a senior.

“I am extremely grateful and excited to be a part of the Milwaukee women's basketball program,” Cantley said. “I had the opportunity to work alongside coach Rechlicz for one season in Madison, and I knew she would be a great leader of her own program. The dedication and passion that she and the staff exemplify for this program and university is what has made them successful. I am honored to work with not only great coaches, but even better people here at Milwaukee!”

Before her time in Madison, Cantley was part of a long run of success at Virginia Tech. She helped the Hokies rack up 110 wins in her seven years in Blacksburg, advancing to three postseason tournaments, including two NCAA Tournament appearances. While with the Hokies, Cantley coached two-time All-Atlantic Coast Conference honoree Kerri Gardin and Nare Diawara, the highest WNBA draftee in Virginia Tech history.

Cantley had an earlier run at Western Carolina from 2001-04. The Catamounts won 21 games in 2002-03 behind first-team All-Southern Conference selection Jennifer Gardner. Prior to Western Carolina, Cantley coached at her alma mater, UNC Wilmington, for three seasons, aiding the Seahawks to the championship game of the Colonial Athletic Association tournament in 2000 with an 18-12 record.

A native of Beckley, W.V., Cantley earned her bachelor’s degree in physical education in 1999 from UNC Wilmington, where she was a four-year letterwinner in basketball. She finished her career at Wilmington on the school’s top 10 all-time list in rebounds.