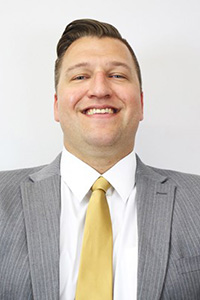 John Bowler has been hired as an assistant coach for the Milwaukee men’s basketball program for the 2019-20 campaign.

“I am very excited to add John to our program and staff,” head coach Pat Baldwin said at the time of the hiring. “He checked the boxes in many areas as I was conducting our search. John was an accomplished player, garnering several accolades as one of the best mid-major players in the country while at Eastern Michigan. His years playing both collegiately and professionally was something I was looking for to work with our young men. In addition, his experience as a head coach and teacher is an added value to our program moving forward.”

Bowler joins the Panthers following one season as the head coach at Des Moines Area Community College in Boone, Iowa. He led the Bears to a 22-10 overall record last winter, with the season coming to a close with a loss in the semifinals of the National Junior College Athletic Association (NJCAA) Region XI Division II Basketball Championship.

“John is a very good in recruiting and evaluating talent,” Baldwin said. “I truly believe we have a talented staff with Paris Parham, Terrance McGee and now John joining our group will add to the synergy that we currently have on our staff. John has a great family, which we welcome with open arms to the Panther family. John will work exclusively with our post in their development and continued growth.”

Last season wrapped up a five-year stay at DMACC for Bowler, with the first four as the top assistant on the staff. During that stretch, the team compiled 98 wins, capturing an ICCAC Conference championship, a Region XI championship, while also earning an NJCAA tournament appearance. Bowler’s first season at DMACC saw the Bears finish 28-7 and culminated with a trip to the Final Four of the 2015 NJCAA national tournament.

During his time at DMACC, Bowler helped produce multiple all-region and academic all-region players, while sending over 20 Bears on to four-year institutions, with 15 of those moving on to the NCAA Division I or Division II ranks.

A Chicago native and alum of Notre Dame High School, Bowler spent the 2013-14 season as a graduate assistant coach at Delta State University (DSU) in Cleveland, Mississippi. While at DSU, Bowler helped lead the Statesmen to a 26-7 record, the regular season Gulf South Conference Championship and a Sweet 16 appearance in the NCAA Division II tournament.

Bowler entered the coaching ranks after an outstanding collegiate and professional playing career.

As a four-year letterwinner Eastern Michigan University, Bowler scored 1,427 points (finishing 13th in EMU history) and recorded 801 rebounds (sixth in EMU history) to compile one of the finest careers in the history of Eagles basketball.

His best season came as a senior, when he averaged 20.1 points and 10.8 rebounds per game while being recognized by Sporting News Magazine as one of the top Mid-Major players in the country. Bowler was a two-time captain, and two-time All-Mid American Conference honoree at EMU.

Bowler went on to play six successful seasons in Germany's top professional league for ENBW Ludwigsburg (2010-2012) and Telekom Baskets Bonn (2006-2009). As a pro, Bowler led his team to four playoff appearances, a Beko BBL Cup Final, two EuroCup appearances, a top-eight finish in the Eurochallenge and two appearances in the Beko BBL Finals. Bowler's best season came in 2007-2008 when he appeared in 39 games, averaging 12.1 points, 5.3 rebounds and 1.1 assists.

Bowler is married to wife, Elizabeth – a former Eastern Michigan volleyball player – and has two daughters, Grace and Charlotte, and a son, JD.