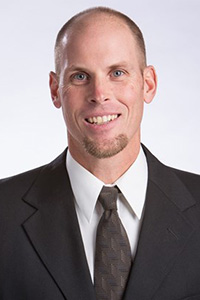 Cory Bigler enters his 17th season as an assistant at his alma mater. Bigler serves as Milwaukee’s head assistant coach as well as pitching coach. He also assists with recruiting.

The 2019 season came to a close with a pair pf pitchers earning Horizon league postseason honors. Jake Sommers recorded 10 saves, struck out 37 batters in 30.0 innings and was selected by the St. Louis Cardinals in the Major League Baseball Draft. Jared Reklaitis set school records with 18 starts and 104 strikeouts. The staff also broke the school record for strikeouts in a season, finishing with 449 (former was 447 set in 2016), as well as establishing a new standard with 18 saves as a team.

Bigler mentored Austin Schulfer through a First-Team All-Horizon League campaign in 2018, topped off by his selection in the MLB Draft. Schulfer broke the career strikeouts record, while both him and Reklaitis set a new mark with 15 strikeouts in a game.

Bigler added another First-Team All-Horizon League selection to his resume in 2017, with Jay Peters finishing second in the league in strikeouts, innings pitched and victories, while also becoming the first hurler in program history to throw four complete games in a row. In addition, the staff broke the school record for most strikeouts in a game, recoding 17 against Oakland April 23. That day, Austin Schulfer also tied what was then the single-game record with 13 K’s.

Bigler mentored the Horizon League Pitcher of the Year in 2016, with Brian Keller becoming the first-ever Panther to win 10 games in a season while also setting season and career records for strikeouts and innings pitched. The staff reset the season strikeout record for the second year in a row, tied the all-time mark for shutouts and posted the second-most saves in program history. Keller went on to be selected by the New York Yankees in the MLB Draft.

The 2015 season saw a pair of pitchers selected as First-Team All-Horizon League members, marking a first-ever for the Milwaukee program. The team earned run average of 3.93 was just the second sub-4.00 mark and finished second all-time. In fact, each of the top four ERA season marks have come in the past six years. In addition to Justin Langley and Joe Pavlovich earning first-team honors, Langley was selected by the Miami Marlins in the MLB Draft and the program witnessed its first no-hitter in school history.

The 2013 campaign continued a recent trend, as the team was second in the Horizon League in ERA (first in league-only games), making the past three seasons the top three-lowest ERA’s in UWM program history. Bigler mentored the Horizon League Pitcher of the Year in Jake Long, who led the league in victories and also in ERA at 1.73 - the lowest in the league by over a run and the lowest ERA by a starter in program history.

Following the season, Josh Uhen was drafted by the Milwaukee Brewers in the fifth round, making him the highest-drafted player in program history and the fourth UWM pitcher to be taken in the MLB Draft in three years.

The pitching staff continued its dominance in 2012, setting a program record for the second-straight year in the ERA category, with the 3.73 ERA bettering the previous mark by nearly half a run. The staff had the top two leaders in strikeouts and three of the top seven in ERA, with first-team all-league selection Cale Tassi leading the Horizon League at 2.74 - the second-lowest for a starter in program history. In addition, two players - Jordan Guth (Philadelphia Phillies; ninth round) and Eric Semmelhack (Milwaukee Brewers; 12th round) - were selected in the 2012 MLB Draft with Kaleb Engelke also signing a professional contract.

Milwaukee finished second in the league in ERA and was first in strikeouts in 2011, with Chad Pierce earning Horizon League Pitcher of the Year honors. He went on to be selected by the Milwaukee Brewers in the 2011 MLB Draft. It was a record-breaking season overall for the staff, as the team ERA was the lowest in program history to that point. The strikeout total broke the school record, as did the six shutouts that were thrown in 2011. In addition, the .258 opponent average was the second-lowest in team history, just off the program record of .256.

The Panthers led the Horizon League in ERA in 2010 and went 4-1 in the league tournament, riding strong pitching to the championship. The team recorded a 2.66 ERA in the five games, limiting opponents to just a .247 batting average.

In 2007, Robert Michalkiewicz earned second team all-league honors, leading the conference in shutouts and complete games while setting UWM records for career games started, innings pitched and with his streak of 22.1 consecutive scoreless innings. The staff also posted the first one-hitter since April 2003.

Rick Cavaiani recorded the best winning percentage in school history in 2006, going 8-2 with seven-consecutive wins at one point in earning all-league honors. Jed Dolske finished with a 2.33 ERA and seven saves, setting the school record for career saves while becoming just the second-ever Panther to pitch in more than 100 games. Aaron Sorenson earned Horizon League Newcomer of the Year honors in 2005. The junior hurler tied the school record with nine victories and also tied school records for strikeouts in a game with 13 against Butler and consecutive wins in one season with seven straight.

A three-year letterwinner from 1993-95, Bigler transferred to Milwaukee from UW-Oshkosh, where he played in 1992. At UWM, the righthander posted an 11-8 record, pitching 136.0 innings in 21 starts. Bigler’s best season came in 1994 when he posted a staff-best 4.26 ERA to go along with a team-high 47 strikeouts. Following that season, Bigler was drafted by the Pittsburgh Pirates in the 23rd round of the Major League Baseball Amateur Draft. Bigler played two seasons of professional baseball.

In addition to his credentials as a pitching coach, Bigler has also served as the coordinator and instructor of the Bigler Baseball Summer Camps each of the last 10 years. The Bigler Summer Camps feature instruction on all aspects of the game.

Bigler and his wife, Marci, reside in Brookfield with their three children: daughters Emery and Peyton, and son Brooks.