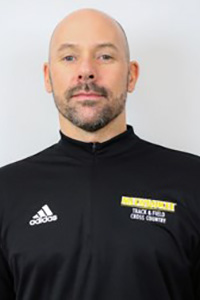 Andrew Basler enters his second season as the head coach of the Milwaukee track & field and cross country programs heading into the 2019-20 school year.

Basler had an impressive start to his time at Milwaukee, bringing home four team trophies in his first season with the Black & Gold.

In fact, after being hired in September, Basler helped coach Milwaukee's cross country program to arguably its greatest showing at the Horizon League Championships in program history as the women brought home the team title while the men finish as league runner-up. The MKE men also earned a regional ranking during a memorable cross country season for the Panthers.

He then capped year one with a pair of runner-up trophies at the league outdoor championships.

In all, Milwaukee turned in 32 top-three finishes at the league meets, including eight league champs. They also were honored with 12 Horizon League Athletes of the Week and turned in 59 top-10 finishes in program history, headlined by three new school records.

A pair of Panthers earned their way to the NCAA West Regionals, just missing berths to the NCAA Championships.

“After an extensive national search that produced a group of highly-qualified finalists, Andrew quickly rose to the top as our choice to lead the program,” Milwaukee Director of Athletics Amanda Braun said at the time of his hiring. “His background of success on both the conference and national level is impressive and we believe he can help us take the program to the next level.”

Basler came to Milwaukee following five years as the assistant men’s and women’s track & field coach at Central Michigan University. He also served as a graduate assistant coach at CMU from 2005-07.

“I am extremely excited to join the Panther Family,” Basler said. “I am very thankful to Amanda Braun and Kathy Litzau and the rest of the search committee for this process and having the confidence in me to be able to step in, fill some big shoes, and be the next head coach at Milwaukee.

“There is a rich history and tradition of winning at Milwaukee. I am excited for the challenge that will bring and for the opportunity to be able to grow on that. I am looking to bring in a new energy and a new passion. I am excited to get there and get the ball rolling – meet the staff and sit down with the athletes and get a chance to get to know them.”

Most recently at CMU, Basler assisted the head coach with all administration of the program while also writing and implementing training programs for jumps and combined events. He helped in recruiting and also planned and budgeted for all team travel. During his first stint at CMU, Basler was in charge of sprints, jumps, hurdles and combined events with the Chippewas.

From 2007-13, Basler was the associate head women's track and field coach and the assistant men’s coach at UC Riverside, where he worked directly with the sprints, hurdles, jumps, javelin and combined-events.

Administratively, Basler managed the program's travel and equipment budgets while also serving as meet director for home track and field and cross country meets, including the Big West Conference Championships from 2008-12.

Under the tutelage of coach Mark Guthrie at Wisconsin-La Crosse, Basler won the 2002 NCAA Division III indoor national title in the long jump. He was a three-time NCAA Division III All-American and was the captain of La Crosse's teams that swept the indoor and outdoor NCAA team championships in 2001 and 2002.

Basler earned a Bachelor of Science degree in art from La Crosse in 2002 and his a Master of Arts in Sport Administration degree from Central Michigan in 2014.