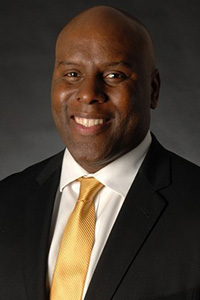 In his first season on the bench, he led the Panthers to 16 victories, an improvement of five wins over the prior season while also finishing four spots higher in the final Horizon League regular season standings.

Included in that record was an impressive 17-point (73-56) victory over a Loyola Chicago team that finished the season ranked No. 7 in the final USA Today Coaches Poll, advanced to the Final Four and posted 32 wins including contests over No. 5 Florida, No. 13 Tennessee, No. 22 Miami and No. 24 Nevada. MKE also handed Iowa State its first loss in a home opener in 20 years when it upended the Cyclones, 74-56, in Baldwin's second official game as head coach.

In the classroom, the team was honored as part of the NCAA Academic Progress Rate (APR) Public Recognition Awards for outstanding academic achievement. Milwaukee was one of just 35 men's basketball programs recognized nationwide and the only member of the Horizon League on the list after posting a perfect 1,000 four-year rate. The program achieved the same distinction in May 2019 for this past school year.

Five different school records were set over the course of the 2017-18 campaign, with Milwaukee advancing to the semifinals at Motor City Madness - the only league school to advance that far in each of the two seasons.

In his second year, the team was among NCAA leaders at times in nearly setting the program record for free throw percentage (at .746) and was essentially in every game, holding second-half leads in eight of the final 11 outings of the campaign.

Baldwin joined Milwaukee from Northwestern University and became the seventh head coach since Milwaukee's 1990 move to NCAA Division I.

"We are proud to have Patrick join the UW-Milwaukee family," said UWM Chancellor Mark Mone at the time of the hiring. "His deep commitment to have our student-athletes succeed in the classroom as well as on the court reflects the values of Milwaukee basketball. I know he will also play an important role in helping to connect our university to the community."

Baldwin spent four seasons as an assistant coach at Northwestern, helping rebuild his alma mater into a force in the Big Ten.

"Patrick has played a major role in the resurgence of a successful program and is ready to take the next step as a head coach," Milwaukee Director of Athletics Amanda Braun said at the time. "We are very happy that step will be taken at UWM and as a Panther. He is very familiar with the Horizon League and the Midwest and will continue to build on the foundation we have put in place. I am thrilled to welcome Patrick, his wife, Shawn, and their children to the Milwaukee program."

"I want to thank Amanda Braun and Chancellor Mone for affording me the opportunity and honor to serve as the head coach at the University of Wisconsin-Milwaukee," Baldwin said. "I am extremely excited about this opportunity to lead a program that has a great tradition of winning, resources to help facilitate our ascension in the Horizon League and commitment from the entire administration. Our main goal and focus is to compete and win championships. I can't wait to get started with our current roster of student-athletes and work toward achieving great success both on and off the court."

A key member of the Northwestern coaching staff under head coach Chris Collins, Baldwin saw the Wildcats increase their win total in each of his four years there.

That culminated his final season with a school-record 24 victories and the first NCAA tournament berth in school history. NU's campaign also included 10 wins in Big Ten play for the first time since the 1930s. That followed what was a school-record 20 wins during the 2015-16 campaign.

As an assistant coach at NU, where he worked primarily with the guards, Baldwin helped the Wildcats land recruiting classes ranked in the nation's top 30.

"The entire Wildcats community is thrilled for Pat Baldwin, an outstanding representative of our university," said Northwestern Vice President for Athletics & Recreation Jim Phillips. "He was an exceptional student-athlete, and has been an incredible mentor for our young men during his tenure on the men's basketball staff."

Baldwin, a 1994 graduate of Northwestern, was one of the top players in school history. He still stands among the top 20 scorers, was a three-time team captain, graduated as the school's all-time leader in steals and assists, and was the Big Ten Defensive Player of the Year as a senior.

"I'd like to thank the Northwestern University community under the leadership of President Morty Schapiro, Vice President for Athletics & Recreation Jim Phillips and his staff, head coach Chris Collins, the staff and players for four unbelievable years," Baldwin said. "I was able to come back to my alma mater and be a part of a tremendous transformation in the men's basketball program, culminating in a dance in the NCAA tournament. Thank you for all of the great memories."

Baldwin played professionally in Bosnia and Croatia before joining the coaching ranks. He has valuable firsthand experience in the Horizon League, beginning with two seasons as an assistant at UW-Green Bay before a seven-year stop at Loyola Chicago, where he finished as the associate head coach. Prior to arriving at Northwestern, he spent two seasons at Missouri State, where he recruited Missouri Valley Conference Freshman of the Year Marcus Marshall.

A native of Leavenworth, Kansas, Baldwin got his coaching start during the 2001-02 season at Lincoln University in Jefferson City, Missouri.

What they are saying about Patrick Baldwin:

"Pat has played an integral role in the building of our program at Northwestern over the last four years. He has been heavily involved in all aspects of the program, whether it be on the court as a coach, in recruiting, in the community or with our alumni. He is more than ready to head to Milwaukee and do a terrific job. I know that he will do great things."

“Pat Baldwin is one of the greatest basketball players ever to wear Northwestern's uniform, and his tireless dedication and positive energy were invaluable during his time as a coach. He will be missed, but I know the entire Northwestern community is delighted to see such a terrific man receive such a wonderful opportunity.’

"Pat's limitless enthusiasm, vast knowledge of the game, relentless work ethic, and steadfast commitment to the student-athlete experience have prepared him for this opportunity. This is a spectacular hire by Amanda Braun to lead the Panthers, and we can't wait to see what the future holds for Pat, Shawn, Patrick, Tatum, Brooke and Claire, who will always be a part of the Wildcats family."

"I have had the chance to get to know Pat as an assistant for my son, Chris, over the past four years. He is one of the finest men I have ever been around in my 45 years in sports. His integrity is off the charts, and you will love his ability to connect with people socially and what he brings to the table for your program. He has a great family and is all about the right things. He's a wonderful man, a terrific coach and a great teacher. He has a great basketball mind, a great spirit and a great heart. We will miss him at Northwestern. You got yourself a star and a true champion in Pat Baldwin."