Victoria Pagel is the 2017 Ritzenthaler Museum Research Internship Award Recipient. In the spring of 2017 she began work with the Milwaukee Public Museum’s German silver brooch collection. During the 18th and into the 19th century, silver ornaments were popular trade items and gifts exchanged between Native Americans and European fur traders. Popular types of silver objects of the era included brooches, bracelets, gorgets, earrings, and crosses. Brooches, however, quickly became the most common type of adornment used by Native Americans. 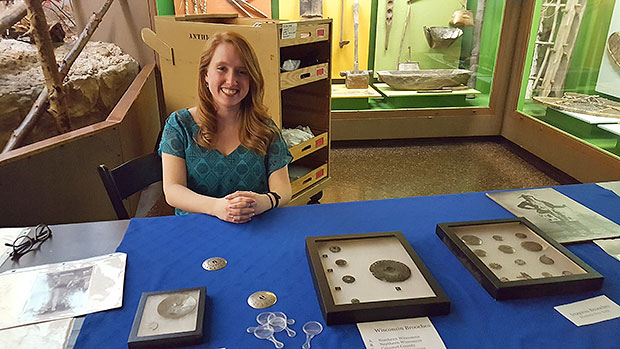 Because of the growing popularity of silver ornaments among Native Americans during the Fur Trade, European traders could not keep up with demand for them leading to the rise of silversmithing in North America. Silversmiths quickly became established in places such as Quebec and Philadelphia. Indigenous silversmithing also emerged during this time, beginning with the Iroquois in the eastern United States including the Onondaga, Seneca, and Oneida.
Researchers believe that the Oneida, Stockbridge, and Brothertown brought knowledge of the craft with them to the territory we now know as Wisconsin making the Wisconsin and New York regions the two main centers of indigenous silversmithing. After 1830, a cheaper alternative to silver made producing brooches and other types of adornment much easier. This silver alloy, “German silver”, contains little to no silver and is comprised of varying amounts of copper, nickel, and zinc. All of the brooches included in this project are made of this German silver alloy.

The MPM’s collection is comprised of a couple hundred brooches that were acquired between 1887 and 1984. After a review of museum documentation, Ms. Pagel found that the majority of brooches were acquired during expeditions to various places throughout North America, including Mexico. Anthropologist Samuel A. Barrett, a former director of MPM, collected the largest number of brooches from the Iroquois in Western New York and Ontario, Canada in the early 1900s. Subsequently, expeditions were carried out in the 1920s by anthropologist Alanson B. Skinner who acquired brooches during his expedition to the Menominee Reservation near Keshena, Wisconsin. Analysis of Mexican Kickapoo brooches are also included in this study. The Kickapoo originally resided in the Great Lakes Region where they most likely learned the silversmithing craft.

Preliminary brooch inventory data was collected and categorized this past spring and Ms. Pagel’s research and data collection has since focused on detailing secondary decoration and measurements. Brooches currently on exhibit at the Milwaukee Public Museum were also temporarily removed to inventory and photograph. Further research will include adopting a “biographical” approach to analyzing the collection, which involves considering the objects’ “social lives” including the specific economic, political, and social contexts in which they were produced, traded, used, and collected. This approach will include reviewing and critically analyzing accompanying collection documentation.

This project will add to our understanding of how this type of adornment was used to express and maintain identity, the uses and limitations of a biographical approach to the study of material culture, and how the meanings of these brooches have changed over time. Ms. Pagel will be publishing her research in an upcoming master’s thesis, which will make information about this collection more accessible to future researchers.