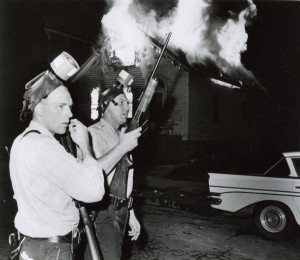 In August of 1966, the Milwaukee NAACP (National Association for the Advancement of Colored People) Youth Council established its official headquarters known as Freedom House. It was located at 2026 North Fifth Street, which happened to be in one of Milwaukee’s most impoverished neighborhoods. Freedom House’s location brought the Youth Council in closer contact with the poor and working-class black community, particularly neighborhood youth who could be recruited as members. The house also served as a home for some Youth Council members who had nowhere else to go and also a second home for Youth Council advisor Father James Groppi when he was away from St. Boniface Parish.

The house served as a place where the Youth Council and its Commando unit would often hold meetings and strategize. Eventually, the Freedom House location on North Fifth Street was condemned and razed. As the Youth Council’s interest in housing issues grew, the group rented a small cottage at 1316 North Fifteenth Street in the area of the Kilbourntown III Urban Renewal project area that was dislocating many African American families. On the second day of open housing marches, just after the Youth Council had returned from the South Side, the Freedom House caught fire. Those inside escaped to safety out the back door. Many Youth Council members maintained that hostile police officers caused the fire by shooting tear gas canisters into the house. Although the house was burned beyond repair, the next day, the Youth Council held a rally in the front yard. EM