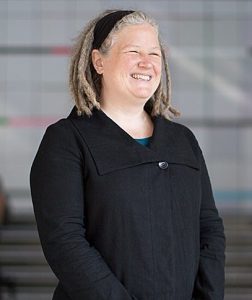 Paul: Tell me about the C21 talk in Curtin Hall you attended earlier this month. Who was it? What was the focus of their lecture?

Bryce: TL Taylor (Professor of Comparative Media Studies at MIT and co-founder and Director of Research for AnyKey) gave a lecture about streaming and this new phenomena of watching people play games. People are watching streamers not only for the gameplay, but for the streamers’ personalities as well. Audience interaction is vital to being a successful streamer.

Bryce: Audience interaction is definitely having an impact on game development. With the popularity of streaming and the large audiences it brings, some game developers are making their games as “streamable” as possible. An example is games that feature a lot of player choice. These games allow for the audience to get involved and help make decisions.

Audiences are also very important to esports. Audiences are what bring in the money, which is why game developers are now more open to esports. In the past the developers have not always been the biggest supporters of esports, at least until they saw the audience it drew.

Paul: When I think of esports, I always think of the players, but it really seems like the audience is just as important. Speaking of audience, did the one at the lecture ask any good questions? What did they want to know about and what was the response?

Bryce: There was a lot of good audience interaction at the lecture. A lot of people were curious about how this new type of media/entertainment fits into the current media/entertainment landscape. There were questions asking about comparisons between streaming and traditional forms of media. There was a question about if streaming can be considered, work which was really interesting. Gaming is usually seen as a hobby or pastime, but streamers treat it as a job.  Playing and commentating on games is their livelihood and they put a lot of effort into perfecting their craft beyond just being “good” at the particular game they’re playing.

Paul: That is fascinating. It also makes me wonder if they said anything about what the future holds or made any predictions. Any interesting parting words they left the audience with?

Bryce: There were some questions about the future, but TL Taylor said she doesn’t really like to predict the future because it is so hard to predict and there are so many factors that can affect it.  I would say the overall theme of the lecture is that streaming is a lot more complicated than people think it is. It takes a certain level of personability and dedication to be a successful streamer. Being able to entertain an audience while playing a game well is not as easy as it looks.