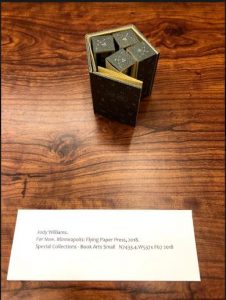 Michael Koppa chronicled his career on Tuesday, September 24th in the 4th floor conference room of the Golda Meir Library. Koppa is an artist who focuses on making uniquely beautiful books. About 25 people gathered to listen to Koppa, whose parents founded the Milwaukee institution Koppa’s Fullbeli Deli (a name Michael Koppa came up with). Throughout his career, Koppa has worked on various books including a single piece of paper accordion fold book titled Enough!, a scrapbook of things various artists sent him on Facebook called Slowbook, and an
expertly crafted poem book, Native Son at Home. Today, Koppa owns a stonecutting business in which he marks dates in gravestones around the state. He continues to produce art at his home in Viroqua, WI.

Koppa’s college professor defined art as “the arrangement of things in a space.” By looking through Koppa’s work, it is easy to see this definition in practice. Each element in the books he crafts such as the lettering and images are carefully picked and meticulously placed. The books Koppa makes are meant for much more than just reading. One could spend a long time just appreciating the artistry and patience each book took to create. Koppa said he does art for himself and for personal expression. He believes art is something everyone should spend more time on. He adds that being able to express oneself is important to enjoying life and helps us stay well-rounded and motivated in all areas of life.