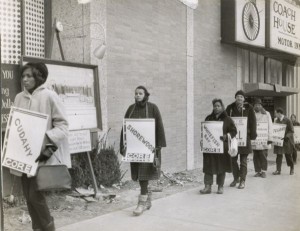 Milwaukee’s chapter of CORE (MCORE) was founded in 1963 by Cecil L. Brown, Jr. and John Givens, Jr. Brown was elected to the Wisconsin State Assembly in 1954 and his successful run for the assembly partially inspired Vel Phillips to run for the Common Council in 1956. The Milwaukee Chapter of CORE sponsored Milwaukee’s first civil rights sit-in demonstrations. The demonstrations were held in July 1963, shortly after the chapter was formed.

Chapter members picketed and staged sit-ins at the Milwaukee courthouse, demanding the removal of the president of a sausage manufacturing company, Fred E. Lins, from the Social Development Commission. Lins had made insensitive and derogatory racial remarks about African Americans that CORE members found offensive. Lins stated in an interview that a way should be found to keep the ignorant poor, particularly Blacks, out of Milwaukee. He also stated that most Blacks have “an I.Q. of nothing.” When the demonstrations against Lins began, only 18 people participated. After a few more days, the picketing gained more attention and over 100 people joined the protest. Brown and other CORE members trained people in nonviolent techniques. The sit-ins lasted for close to a month.

The Milwaukee chapter became known primarily for its demonstrations. In 1964 MCORE joined the Milwaukee United School Integration Committee (MUSIC), which was an umbrella organization created to attack segregation in Milwaukee Public Schools. It staged sit-ins at the public school administration building over school segregation. Shortly thereafter, MCORE picketed over billboard advertising that the chapter considered to be bigoted. In 1963 and 1964, chapter representatives were successful in getting local department stores to hire more African Americans. In 1966, the chapter began its “Operation Breadbasket” project in which the chapter contacted more than 200 employers in the Milwaukee area trying to get 1,500 jobs for impoverished people of color. The chapter was dissolved in 1967. EM