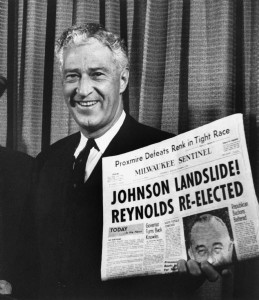 Warren P. Knowles was the governor of Wisconsin from 1965 to 1971. During the 1960s civil rights protests in Milwaukee, Governor Knowles activated the Wisconsin National Guard on two occasions. The first occurred in August 1966 during the Milwaukee National Association for the Advancement of Colored People (NAACP) Youth Council‘s Eagles Club demonstrations in Wauwatosa. Governor Knowles deployed troops to Wauwatosa after Mayor Ervin A. Meier requested the state’s assistance in protecting the protestors from angry counterdemonstrators.

The next year, Governor Knowles again called up the National Guard at the request of Milwaukee Mayor Henry Maier, who had a direct “hot line” to the governor. This request was made in response to the July 30, 1967 civil disturbance on Milwaukee’s North Side. Thousands of soldiers were sent to Milwaukee to assist the police department with patrolling the streets and enforcing the citywide curfew. LW