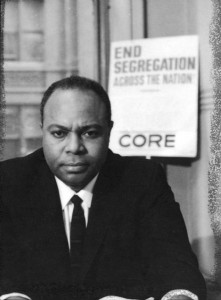 James Leonard Farmer, Jr. was born on January 12, 1920 in Marshall, Texas. Education was held in high regard in Farmer’s family. In 1918, his father James L. Farmer, Sr. earned a P.h.D from Boston University, becoming one of only twenty-five African Americans who held Ph.D.’s at the time. After completing high school at the age of fourteen, Farmer enrolled in Wiley College where he earned a Bachelor of Science degree in 1938. Farmer was a Methodist pacifist and deeply influenced by Gandhi’s principles of nonviolent protest. In 1942, he and a group of college students founded the Committee of Racial Equality in Chicago, Illinois. The organization was later renamed as the Congress of Racial Equality (CORE). Farmer served as the national director of the organization from 1961 until 1966. CORE was a leading civil rights organization during the Civil Rights Movement. The interracial organization was known for its use of nonviolent, direct action tactics in confronting racial inequalities. In the early 1960s, CORE also became recognized for its “Freedom Rides” throughout the South.

In October 1963, Farmer came to Milwaukee to address two civil rights meetings and attend a Milwaukee United School Integration Committee (MUSIC) and Milwaukee chapter of CORE (MCORE)– sponsored school desegregation rally. While in Milwaukee, Farmer commented that the pattern of housing segregation in Milwaukee was one of the worst he had ever seen in the country. He also stated that “the actual exclusion of Negroes from other areas makes Milwaukee one of the most segregated cities in the country.”

In 1969, Farmer accepted the post of Assistant Secretary of Health, Education and Welfare from President Richard Nixon. In 1985, his memoir, Lay Bare the Heart: An Autobiography of the Civil Rights Movement, was published. Throughout the 1980s and 1990s, he taught history at Mary Washington College in Fredericksburg, Virginia. In 1998, President Bill Clinton officially recognized James Farmer’s contributions to the Civil Rights Movement by awarding him the Presidential Medal of Freedom. In July 1999, Farmer died of complications from diabetes. EM