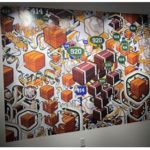 On Thursday, January 23, 2020, I had the opportunity to listen to Reginald Baylor and Melissa Courtney talk about the Reginald Baylor Studio and everything that it embodies.

The day prior, I visited the exhibit “Manufacturing Creativity” at the Union Art Gallery with Kelly, a longtime friend of mine. Going into the exhibit, we thought that it would be a collection of traditional paintings. Surprisingly, the exhibit wasn’t anything we had expected at all. Instead, it was a collection of t-shirts, shower curtains, collages, and solo prints, with some similarities to Andy Warhol and Takashi Murakami. The pieces of work ranged from an average-sized print to a large collage that towered from floor to ceiling. Kelly and I were fascinated with the work, and she decided to attend the artist talk with me on Thursday. 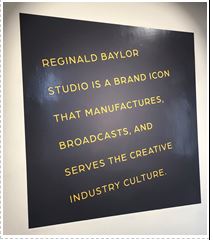 Almost immediately into hearing Baylor and Courtney talk about the Reginald Baylor Studio, the entire exhibit started to make sense to me. This was more than just art. It was about creating a movement, as Courtney suggested. Baylor touched on how difficult it was to be an artist producing fine art paintings, and how the idea of “why make one painting when I can make more with manufacturing and well-run machines” led to the creation of the Reginald Baylor Studio.

Baylor and Courtney compared what they do at the Reginald Baylor Studio to a sports game. Each sports game is extremely theatrical, and it’s not about whether the team wins or loses, it’s about the performance. They referred to their team as battling for their city, Milwaukee. The Reginald Baylor Studio focuses primarily on employing as many people as possible and will search for products only if a local vendor can make it. In the same way, the Digital Arts and Culture program at UW-Milwaukee encompasses its own team, made up of individuals gaining experience in arts, humanities, social sciences, and information studies. 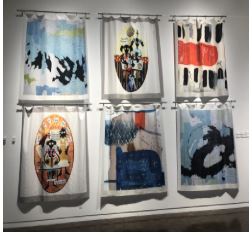 To wrap up their talk and Q&A, Baylor and Courtney gave advice to current students graduating in the arts.

Going forward, the goal of the Reginald Baylor Studio is to become universal and have products available worldwide, and to allow people the ability to purchase art at a lower cost. The studio hopes to sell more pieces and employ more people through the manufacturing of the products.

I look forward to seeing the work that the Reginald Baylor Studio will produce in the future, and I’m excited to see their goals fulfilled as they work towards universalizing their artwork.