Galliformes (chickens, turkeys, quail), Columbiformes (pigeons, doves), Passeriformes (crows, sparrows, finches) and Psittaciformes (parrot family) are the types of birds most commonly used in research. They may be used in studies of neurobiology, endocrinology, nutrition, ethology, embryology and microbiology.

Sudden movements or loud noises can upset an entire flock. Cage manipulations should be done slowly and deliberately. Capturing the bird on the first attempt is the least stressful to the bird. Small birds should be released with unobstructed clearance and below perch level. They should not be tossed into the air as they may not be prepared to fly. 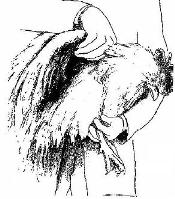 These birds are usually docile but they can peck, scratch or inflict puncture wounds. When capturing the bird both hands should be placed on the bird’s wings holding them down onto the body. Pick up the wings in one hand and restrain the legs between the fingers of the other hand. (Figure 6) Chickens can be carried safely upside down by the legs but remain calmer if the handler places the animal under one arm and maintains gentle pressure against the wing next to the arm. Some chickens will require leg restraint when doing this. The chicken may lie quietly if a cloth is draped over its head.

Nets can be used to capture these species but manual methods are preferred for birds in small cages. Remove the bird quickly from the net once captured to prevent injury. Large pigeons can be carried the same way as a chicken. Smaller birds can be restrained with one hand holding the head between the thumb and forefinger, and the palm of the hand supporting the bird’s body. Caution should be exercised to avoid encircling the thorax completely. If a bird is held too tightly it can compromise respiration resulting in hypoxia and hyperthermia.

In birds, a series of air sacs communicate with the lungs via bronchi. There are eight or nine of these air sacs in the domestic chicken. They help to compensate for the small lungs of birds and in addition are important in heat regulation and in keeping the body light for flight. Expiration and the following inspiration will move that air through the lungs and into the cranial groups of air sacs. The air will then pass through the trachea to the outside with the second expiration. This is important to consider when using volatile anesthetics in birds because all inspired air is not expired prior to the next inhalation.

The bones of birds are also especially adapted for lightness. Some bones are hollow; others are pneumatized and connected to the air sacs of the respiratory system. Birds are susceptible to heat stress since the normal body temperature is higher than that of other animals and they are unable to dissipate heat from the body surface. This is especially true of the restrained bird that is frightened or otherwise stressed. A bird will exhibit signs of heat stress by extending or raising the wings away from the body. In addition open-mouthed panting and rapid respiration may be seen.

The ureters of birds collect waste products from the kidneys and continue to the cloaca and do not empty into the urinary bladder as in mammals. The urine of birds consists of uric acid and salts and is excreted in a semi-solid form.

Other anatomical features of birds include a lymphatic system with lymphatic follicles rather than lymph nodes, nucleated red blood cells, no gallbladder in some species and no external ears.

Lips and teeth are absent and are replaced functionally by the cutting edges of the beak. The tongue of most domestic birds is non-protrusible. Birds have fewer taste buds than mammals. The esophagus enlarges just cranial to the thoracic inlet to form the crop. This structure may serve as a food reservoir when the true stomach is full; otherwise food is moved from the crop directly to the muscular portion of the stomach (gizzard).

Crop milk is fed by pigeons and doves to their young. The production of crop milk is under control of the hormone prolactin. It is produced by a desquamation process of the proliferated squamous epithelium of the very well developed bi-lobed crop of both sexes. The stomach is divided into the glandular part called the proventriculus and the muscular part the called the gizzard. The proventriculus produces acid and pepsin and the gizzard does the mixing.

Domestic fowl have paired ceca at the junction of the ileum and colon that breakdown food, especially cellulose by the presence of symbiotic bacteria. The colon empties into the cloaca. This structure serves as a common passageway for the urinary, digestive and reproductive tracts. The vent is a transverse slit with dorsal and ventral lips that invert into the cavity of the cloaca.

Males and females may exhibit sexual dimorphism which allows the males and females to be told apart. Some species do not exhibit these differences. Some species will exhibit some sex indicators during breeding season while others can only be told by surgical inspection of the gonads or at necropsy. Breeding techniques will vary tremendously depending on the species.

Female
In most birds only the left ovary and oviduct are functional. The right ovary and oviduct eventually degenerate persisting only in rudimentary form. The infundibulum consists of the funnel or fimbria which receives the ovum and the chalaziferous region which forms the chalazae, which are two coiled spring-like cords that extend from the yolk to the poles of the egg. The magnum is the longest portion of the oviduct. It is also the albumin-secreting region because the white of the egg is deposited around the yolk as it passes through this section of oviduct. The egg acquires the soft shell membrane in the isthmus. The uterus or shell gland is where the egg acquires the hard calciferous shell pigments. The egg remains in the shell gland for about 20 hours, but most of the hard shell is laid down in the last hours. The required calcium and potassium for the shell are extracted from the female’s blood. The egg goes through the vagina in a few seconds to minutes. While in the vagina, the egg becomes coated with mucus which functions to seal the pores. From the vagina the egg passes through the cloaca to the outside. Incubation periods for different bird species vary. Eggs collected to be incubated should be freshly laid and not washed. Cracked eggs should be culled. If embryo development has already begun, interrupting incubation may kill or damage the embryo.

Male
The testes of birds do not descend into a scrotum but remain near the kidneys. Birds do not posses accessory sex glands.

Laboratory birds should be quarantined and acclimatized for two to four weeks, depending on species and source. During this time serologic testing, examination for internal and external parasites and bacterial culturing may take place. Housing for lab birds should provide a suitable physical and psychological environment. Cages should be large enough to permit normal physical activity and social interaction. Perches should be located in a position to avoid contamination of food and water. Perches of varying diameters can partially mimic the natural habitat of the bird and may provide exercise for the bird’s feet.

Birds are susceptible to temperature stresses so ventilation is very important. As the environmental temperature rises, ventilation should be increased. Relative humidity should range from 45 to 70 percent. Floors can be covered with sand, gravel or shavings depending on the species and sanitation requirements. A grid type of flooring can also be used. Food and water are generally provided by a type of automatic waterer or feeder. The length of exposure and type of light can be important in bird reproduction. Special wide-spectrum fluorescent lamps or white incandescent lamps should be used in bird housing facilities as they more closely resemble natural light.

Housing mixed species and multiple age groups together can result in fighting, cannibalism or disease hazards. Visual barriers such as solid cage sides can reduce conflict between groups. Overcrowding in cages can stress the animals and result in disease. Very young birds require an external heat source to prevent chilling and hypothermia. Special cages called “brooders” can be used to house young birds until they grow feathers.

Commercial food preparations are available for chickens. Several types of commercial pigeon diets and dove diets are also available. Specific seed mixtures can also be fed. Grit is available in various sizes and compositions (oyster shell, granite). It is necessary for all birds and should be available ad libitum. Having no teeth to break open seeds and grind their food, birds use grit for this purpose. Ingested grit remains in the gizzard which is a muscular organ of the gastrointestinal tract. Agitation of the seed and grit in the gizzard helps these birds grind up the seeds in preparation for digestion.

Thorough knowledge of the birds’ natural habitat, behavior and diet is essential if using wild birds in research. The procurement, transport, possession and treatment of wild birds and their eggs are governed by state and federal regulations. Wild birds may have difficulty adapting to laboratory housing. Close observation during captivity is therefore important. The behavioral characteristics and natural habitat of the species should be considered. A quiet environment is essential. Bird cages should be equipped with numerous perches placed at heights appropriate for the species and in a location that avoids soiling food and water. Birds should be shielded from visual disturbances during the acclimation period. Placing food and water in several locations and at different heights can help the birds. This can also help prevent dominant birds from stopping the less aggressive birds from eating or drinking.

The most common sources for blood collection in birds are the jugular vein or the brachial vein (wing vein). The feathers at the site of the vein may be plucked or wetted down with alcohol or water to allow for visualization and palpation of the vessel. Insert a 21 to 23 gauge needle and slowly withdraw the blood. Apply thumb pressure on the wound or a hematoma will result.