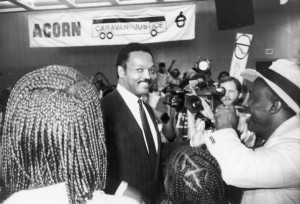 Civil rights activist and Baptist minister Jesse Louis Jackson was born on October 8, 1941 in Greenville, South Carolina. As a youth, Jackson participated in the student sit-ins to desegregate public facilities in the 1960s, while also remaining a dedicated student leader and star athlete. Following his graduation from North Carolina Agricultural and Technical College, he enrolled in the Chicago Theological Seminary. Jackson, however, found himself being increasingly drawn into politics and the emerging civil rights movement. He subsequently left the seminary in 1966 and began working for Martin Luther King, Jr. and the Southern Christian Leadership Conference (SCLC) on Operation Breadbasket, a project which utilized selective buying boycotts as a means to pressure white businesses into hiring more Blacks for jobs. King appointed Jackson national director of the project in August 1967. Jackson remained with the project until December 1971 when he and other prominent Black leaders founded Operation PUSH (People United to Save Humanity), a social justice organization that pressured American businesses to hire more Blacks and to develop stronger business ties with the Black community. During his early years of activism, Jackson concentrated much of his civil rights work in the city of Chicago. In 1966, he helped spearhead the Chicago Freedom Movement to press for integrated schools and open housing. Throughout the 1970s and 1980s, Jackson continued his civil rights work but also decided to venture into international affairs and politics. He made two unsuccessful runs for the Democratic nomination for U. S. president in 1984 and 1988. Although during both elections Jackson’s political following in Wisconsin was quite small, he nevertheless had several delegates in Milwaukee and did a considerable amount of public speaking and campaigning in the city during his runs for the presidency. EM