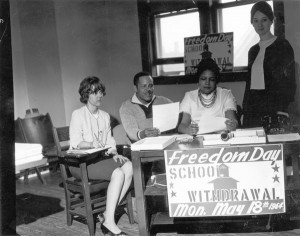 On May 18, 1964, the Milwaukee United School Integration Committee (MUSIC) sponsored its first Milwaukee Public Schools (MPS) boycott. The purpose of the boycott was to dramatize the inadequacies in education received by MPS’ Black students and also to bring attention to the segregation that existed within the school system. Boycott leaders urged parents with children in elementary, middle, and high school to keep them out of MPS in sympathy with the boycott. Approximately 11,000 Black and white students were absent from school during the boycott. MUSIC boycott organizers also referred to the day as “Freedom Day” in Milwaukee.

Organizers purposely held the May 18 boycott on the day after the tenth anniversary of the Brown vs. Board of Education Supreme Court decision which declared segregated schools in the United States unconstitutional. Several North Side churches and community centers opened their doors for the 1964 “Freedom Schools,” which served as alternative schools that children could attend during the boycott. Freedom Schools had special lesson plans tailored toward “Freedom Day.” The curriculum involved emphasis on four particular concepts: freedom, brotherhood, justice, and equality. Freedom School curriculum also included Black history, essay writing, and open discussions. An estimated 8,500 students attended Freedom Schools during the boycott. EM