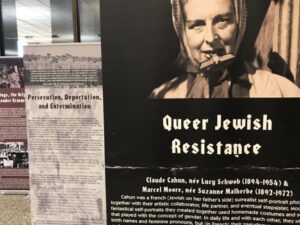 Created by UWM alumnus Vince Tripi, “”Blossom & Wilt”: Queerness Under Fascism” was originally displayed at 2022 Pridefest. This 9-panel exhibit examines the birth of the modern gay and trans identities in 1850s Germany, the rise of fascism, and queer resistance to the Nazi regime.

This exhibit features profiles of people and ideas that advanced the development of the modern gay, lesbian, and bisexual identities in Germany pre-1900 through the end of WWII, and gave voice and bodily expression to the transgender experience as early as the 1930s.

So much of the persecution visited upon LGBTQ people in, for example, in the 1950s and 60s United States included a program of erasure of the incredible diversity of gender and sexuality before and between the Wars. Where might our culture be now if it remembered that same-sex relationships and the transgender experience are not so novel, after all? Were it not for Nazi destruction of research from the likes of Magnus Hirschfeld and the reimprisonment of the men with the pink triangle, even after surviving slave-labor death camps, maybe we’d be further along.

People like us go way back—farther back than almost anybody realizes. The modern movement for civil rights and social inclusion of “sexual variants” can be traced to philosophical musings in the 1860s, moral arguments made before legal and medical associations in speeches in the 1890s, scientific and ethnological research conducted (across the world) in the 1920s, and bombings by anti-Nazi resistance fighters at the height of WWII.