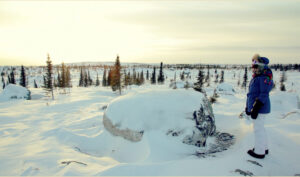 This documentary tracks the journey of Innu poet, actress and activist Natasha Kanapé Fontaine, at a pivotal time in her career as a committed artist. To heal the wound of racism, Natasha has re-appropriated her Innu language and become a media spokesperson. Words have helped her rediscover her roots and empowered her. She gets the conversation going, and as it develops, she questions the need for self-determination for herself as well as for other Indigenous people both here and elsewhere.