Along the Atlantic coast, in a suburb of Dakar, Ada and Souleiman are young and in love. But they face many obstacles. Souleiman is a construction worker, exploited by 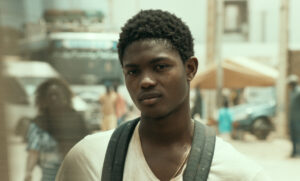 his unscrupulous billionaire boss, whereas Ada has been promised by her father to another man. One morning, Ada learns that Souleiman embarked on a journey to Europe with several of his co-workers. Days later, a fire breaks out during Ada’s wedding and there are claims that Souleiman has returned.