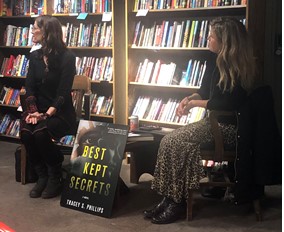 On Tuesday, February 4, I had the chance to see Tracey S. Phillips, author of the new novel Best Kept Secrets, do an interview with Marianne Flynn Statz, a former City of Madison Police detective. For this event, I ventured off campus to Boswell Book Company on Milwaukee’s east side. I had never been to Boswell, but the dull lighting, quiet music playing, and aesthetically pleasing organization of the books was charming, and I can’t wait to go back.

Phillips came and introduced herself to me prior to the interview, which was a unique experience, as I’ve never met an author before. She started her talk by sharing her background. Phillips shared that she came from a family of creative souls. Her grandmother was a pianist and her mother an artist. Phillips added that she went to Berkeley College to study music, where she started getting into jewelry making, drawing, painting, and cooking. With all these unique talents, Phillips described herself as a “serial artist.”

Phillips noted that her book was put to life because she had “stories tumbling in my head that I needed to tell.” These stories morphed into her fourth manuscript, which was published from a connection made via Twitter. Her book, Best Kept Secrets, combines experiences of Phillip’s life, as well as fictional aspects. Together they comprise a murder mystery set in Indianapolis, Indiana, where Phillips grew up.

One quote that Phillips shared that shaped her writing is from Shannon L. Alder, which said, “Your perspective on life comes from the cage you were held captive in.” Phillips stated that she has an estranged brother and a large part of the plot of her book deals with her main character having an estranged brother. Phillip’s son, also a creative soul, contributed his ideas on what the cover art should look like and it became the cover art of the book.

To close the conversation, Phillips shared tips on how to become a better writer. She said that having peer reviewers is one of the ways she became so successful. Without having critiques, it is impossible to grow as a writer. In the same way, this is important in any form of art, whether graphic design, media graphics, journalism, etc. An individual can only grow if they get outside opinion and learn from these critiques.