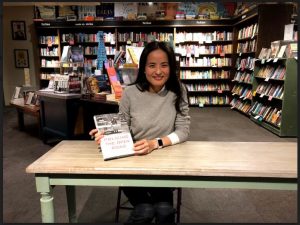 On September 19th, 2019, at 7 pm, Sarah Seo, a legal historian of criminal law, gave a talk to a group of about 15 people at Boswell Books. Her talk focused on her book Policing the Open Road: How Cars Transformed American Freedom. Seo’s book aims to explain how the invention of the car has allowed more opportunities for police to use their power. Most Americans think of the car as a symbol of freedom; however, as Seo points out, cars are heavily regulated along with the roads we drive them on.

Police have near impunity on the roads. They can pull drivers over for almost any reason, and when the police make mistakes, they usually face very little consequences in modern society.  However, police have not always had as much power on the roads as they do today. A fascinating example Seo brought up during her talk is that of Wiley v. State (1916). Before police sirens, police officers would shout at people to pull over, and if that did not work, they would fire their guns at the vehicle’s tires. In Wiley v. State (1916), an officer was using this tactic and missed the tires, killing an innocent woman. The officer ended up being charged with murder.  Seo juxtaposes this example with the modern example of the death of Sandra Bland. Bland was pulled over in Texas in 2015 for failing to use her turn signal. This traffic stop ended with Bland lying on the ground screaming in pain after the officer forced her out of her vehicle with his taser gun. Bland was found dead in a jail cell three days later. Her death was ruled a suicide; however, public outcry due to the suspicious nature of her death led to an official investigation. No one was ever charged for the death of Sandra Bland.

These examples demonstrate how American culture has shifted over the past century towards giving police increasing amounts of power while there is less and less accountability for their actions. According to Seo, this shift occurred because as the popularity of cars exploded, society needed more laws to regulate their safety, but as shown through the examples above, safety does not seem to always be law enforcement’s primary concern. Seo raised several important questions during her hour talk. What can be done to keep drivers safe while protecting our rights as Americans? Should we allow police to have as much power as they do on our roadways?  Is the car still a symbol of individual freedom or has this changed? None of these questions have simple answers but examining and realizing there is an issue is a great place to start.