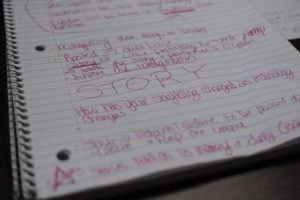 This week, I had the opportunity to attend “Artists Now! Guest Lecture Series: Portia Cobb.” I decided to bring my friend Jacob, who is a student at UW-Whitewater. I was able to explore some of the Peck School of the Arts buildings on campus as I was showing Jacob around. We got to the presentation about 15 minutes early, and it was good that we did because the lecture hall filled up to about 90% capacity.

Prior to this lecture, I was aware of Portia Cobb, as one of my friends had her as a professor last semester, and I knew she was a prominent person in Milwaukee, but I didn’t know much else. The lecture started with two introductions for Cobb, which combined lasted over 20 minutes and showed so much about her character and how respected she is within the Milwaukee community. Polly Morris, the Executive Director of the Lynden Sculpture Garden, talked about Cobb’s residency and her conceptual work, “Rooted: The Storied Land, Memory, and Belonging.” After hearing this introduction, I realized that Cobb is not only prominent in Milwaukee, but all over the world.

To put it simply, Portia Cobb is a storyteller, and she has been telling her stories in different locations worldwide. Some of the ways that Cobb has told stories are via radio programs, poetry, films, videos, and photography. Many of the stories that Cobb tells stem from her childhood growing up in South Carolina, where she was surrounded by immediate and extended family members. When Cobb was older, her mother moved her family to Southern California, and that is where she started telling her stories on radio programs. Her interests started to move towards film, and Cobb traveled to West Africa for a film festival. It was at this festival where she met Iverson White, a former film professor at UW-Milwaukee, and he convinced her enough to move to Milwaukee and teach. She has been storytelling here ever since.

To conclude her lecture, she opened the discussion for questions, and I asked, “How has your storytelling changed as technology changes?” After reflecting on Cobb’s answer, I found that she broke it down into two parts.

First, she said, “I think I’m still evolving in that way. I really think some stories start with me talking to people, or interviewing them, or recording them or a sound. Other things that I didn’t share with you are when I go down south, I love going in the churches and hearing the music and ceremonial part of it. I take that back with me, or even try to document it in some way if it’s through photographs or things that are happening in that community, that reflects history over time.”

Secondly, she said, “I’m really attracted to what I’m hearing, and no matter where I am, I’m always listening. When I first came to Milwaukee and I would ride the bus home, I would listen to what I thought of as dialect. Sometimes I could understand what people were saying, and sometimes I couldn’t. I would listen to radio programs with my kids and think ‘wow they sound really different’ not knowing that we sounded different to everybody. So, I still kind of tune my ears to listen for story and storytelling.”

Portia Cobb has grown in her storytelling over the years and will continue to do so as technology evolves and offers new techniques to share her stories.