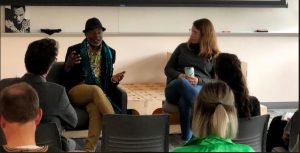 Issa Nyphaga, a political cartoonist, artist, entrepreneur, and social activist, talked with a group of about 30 people at the new Lubar Entrepreneurship Center last Thursday, October 3rd. Nyphaga is also an entrepreneur, starting a solar powered radio station in his home country of Cameroon. Nyphaga began creating art at a young age and noted that art was important in the village he grew up in with his mother. During the rainy season there was not a lot of time for art; the farm needed tending to. However, during the dry season, Nyphaga spent most of his time drawing, playing the drums, and dancing. Nyphaga’s indigenous religion has a strong connection to art, which is in stark contrast to when he was living with his father. His father cited his Islamic beliefs as the reason for forbidding his children to create art. Once his mother moved, bringing Nyphaga with her to live in her home village, he fell in love with being able to express himself through drawing, music, dance, and more.

Nyphaga was jailed in Cameroon for his political cartoons critical of the government. Now, he is sharing his experience and talking about his current projects such as Radio Taboo, a solar powered radio station. Radio Taboo is broadcast in 10 languages due to the large amount of languages spoken in Cameroon. The goal of Radio Taboo is to share important information with the community that is not normally talked about. To make sure the focus stays on the community, all of the journalists are citizens and do not have any professional journalism education. This type of radio station does not exist in the United States anymore. Radio, along with most media, is fully commercialized and the content is focused only on what will keep people tuned in. It will be interesting to see if Radio Taboo is able to maintain its community focus as it grows.