Home » News » Directions in DH: The Overpass Light Brigade and Spaces of Appearance

Lane Hall and Lisa Moline will present on spaces of appearance and their work with the Overpass Light Brigade. Thursday, November 16, 3:30pm in the Digital Humanities Lab.

Lane Hall (UWM Professor, English) and Lisa Moline (UWM Associate Professor, Art & Design) are co-founders of the Overpass Light Brigade, a tactical media performance project that has grown into national prominence within art and activist circles. Along with MTEA’s (Milwaukee Teachers’ Education Association) social media organizer, Joe Brusky, they have guided the development of over 50 Light Brigade chapters worldwide, as the tactics have been widely adopted and emulated for diverse purposes. OLB images have had prominent display on international social media, as well as traditional journalistic media channels such as the Hindustan Times, the BBC, The New York Times, The New Yorker, The Rachel Maddow Show, Al Jazeera, The Huffington Post, PBS Newshour, and Think Progress, to name just a few. These public displays of messages generally focus on issues of social justice, citizen empowerment, and environmental sanity.

In this presentation, Hall & Moline will give a brief history of the development of the Light Brigades, show some examples of this creative form of public broadcasting, and discuss some of the “behind the scenes” aspects of how the network is organized. The discussion will include broader issues of artistic activism, public space, witness, visibility, and “spaces of appearance.” 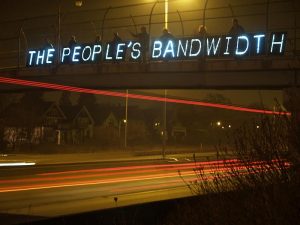