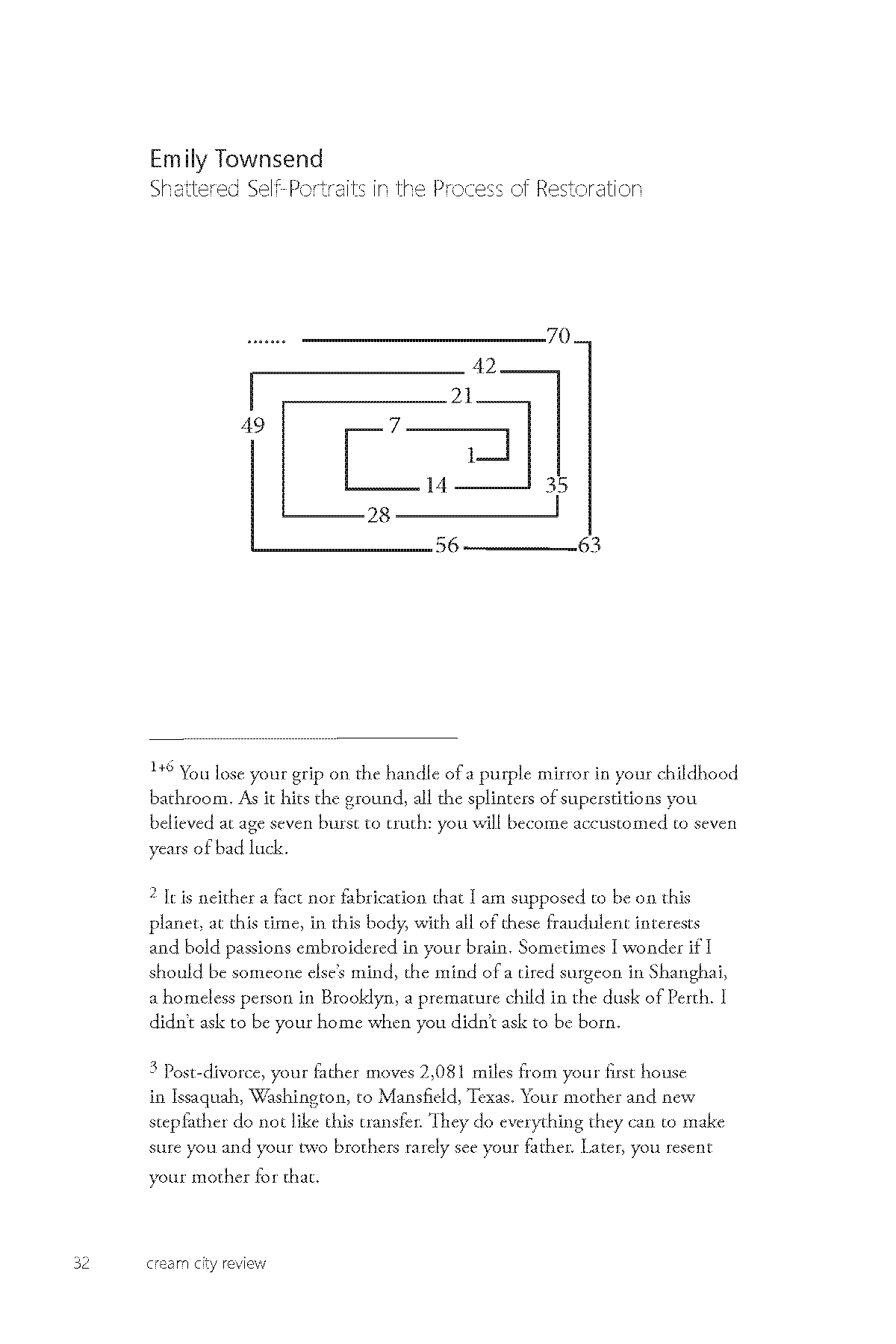 My senior year of undergrad, I took a nonfiction workshop twice. I was still getting adjusted to the genre, spilling out my secrets for classmates who barely knew me. I was also exploring experimental forms in essays: Leslie Jamison’s The Empathy Exams, Kristen Radtke’s Imagine Wanting Only This, Maggie Nelson’s The Argonauts. In both semesters, we covered Jenny Boully’s The Body. I remember one student (now a great friend and editor) brilliantly attempted the form in a different way, and I admired both essays so much that I wanted to try it myself.

“Shattered Self-Portraits in the Process of Restoration” borrows Boully’s form of total footnotes, and my adjustments are the equations in every footnote that is a multiple of 7. Because I broke a mirror twice in fourteen years, the second at the tail-end of the first’s seven years of bad luck, it seemed that the number seven was cursed. It conveniently lifted when I turned 21. Hence the maze at the beginning of the essay: each multiple of seven is like a path inside a labyrinth that I cannot get out. One multiple will lead to a different multiple that isn’t in a correct sequence, enacting a step forward or a step backward. The last footnote’s equation is 70-69, which leads the reader back to footnote one. Even you can’t get out of this chaos.

This essay opens up my first collection, originally set to be a sort of unconventional table of contents like Dave Eggers’ prologue for A Heartbreaking Work of Staggering Genius, but then I read The Body and made each footnote a foreshadowing to the rest of the book. The blank text is essentially the entire book yet it is expatriated, as I felt while growing up away from my hometown during formative years. What bookends this essay is a 40-page rebuttal: written a year later, I finally understood my pessimism was because I willingly put myself through pain, not because of a delusion with broken mirrors. I assigned blame to an object rather than to myself because I didn’t want to properly deal with it.

Sometimes I believed my body and my brain were two entirely separate entities. I constantly struggled with figuring out where I belonged during those bad-lucked years: I was displaced from my hometown due to my parents’ divorce, I was purposely making everything harder for myself as punishment. So I took this superstition of broken mirrors and blamed my unhappiness on the accidents of dropping cheap glass onto my bathroom floor. My brain falsely assured me of a lot of things—“after high school, you’ll move back home;” “don’t worry, people actually like you”—and made me imagine a distinct person I wanted to have been real, but it was a figment of my imagination so desperate to have someone fill in that space. The ontology of my brain on its own seemed to be completely detached from my body.

The most interesting thing about this piece, to me, is how I realized I was wrong and selfish. Rarely do essays make me change my mind on myself, but I had gone through such a colossal shift of feeling lonely to feeling loved back to feeling lonely and then back to feeling loved that the distance I went through both physically and emotionally forced me to see I took so much for granted. A month after I finished writing this I moved to Eugene, Oregon, to see if my love for the Pacific Northwest was still real after a hiatus of not living there for sixteen years. It turned out to be extremely lonely and solipsistic. When I returned to Texas for grad school, I realized my friends and the community were what made me happy and alive. My first two years of college were rough, but that senior year was actually beautiful and involved and I felt like I finally had a place to fit in. I’m a bit terrified to leave in a couple months.

I’m eternally grateful Cream City Review nominated this essay for a Pushcart; it’s a great way to feel validated for a life story that gave me so much pain yet I wanted to share it with anyone willing to read. When I drive between my mother’s house and wherever I’m living while in school, I often think that I wouldn’t have such a story to tell if I didn’t go through what happened, if I stayed in one place after all, if I chose to be optimistic and bright instead. My material would either be a lot different or nonexistent. I enjoy writing dark stuff to help me confront my issues and reassign whatever blame I pin on something else back onto me. It humanizes me, forces my brain and body to rejoin, and make me see the world a little more clearly.

Emily Townsend is a graduate student in English at Stephen F. Austin State University. Her works have appeared in Superstition Review, Thoughtful Dog, Noble / Gas Qtrly, Santa Clara Review, cahoodaloodaling, Watershed Review, The Coachella Review, The Coil, and others. A 2017 AWP Intro Journals Award nominee, she is currently working on a collection of essays in Nacogdoches, Texas.

*Townsend’s non-fiction “Shattered Self-Portraits in the Process of Restoration” appears in Issue 42.1 of Cream City Review.