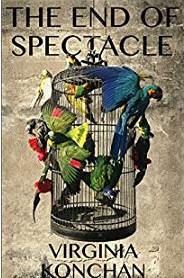 Spectacle is the lingua franca of the present. Though the spectacular may always have drawn an audience, we now have technology that preserves, replicates, and disseminates it, making our pockets the arena for worldwide spectacle that once was available only locally. From politics to pathology, the public’s eye is trained, by force or habit, on that which provokes the strongest response. The etymology of spectacle is, afterall, to look.  Although its obsessions and methods feel very much of the present moment, Virginia Konchan’s smart, lyrical debut collection, The End of Spectacle, transcends a technology-driven zeitgeist. Instead, Konchan’s poems interrogate individual participation in the enduring human spectacles of art and culture, employing wide-ranging intertextuality, ekphrasis, and metapoetics to challenge the notion that spectators (or readers) can ever be absolved of responsibility for that at which they look.

Because of Konchan’s broad focus on (mostly Western) art and culture, the intertextuality of the poems is crucial, and is especially successful because of the diversity of texts and contexts from which she draws. Here, cultural obsession with celebrity transcends the world of film and television. Keats, Jackson Pollock, Dante, Zsa Zsa Gabor, Homer, Whitney Houston, Chopin, Li Po, Duccio, CoCo Chanel, Monet, and Virginia Woolf all appear in the book, among many others. The mix of high and medium brow source texts is established early on. In the opening poem, “Fairytale,” the“you” is hardly a archetypal prince, but instead wears a “Brooks Brothers suit,/ narrowed eyes and pursed lips.”  The mix of cultural lexicons is important because it sets readers firmly in the present, which disallows us to excuse ourselves from the scene. We are asked to examine– sometimes, to indict– not a school or movement, but the foundational premises of movements that posit definitions and dualities.

“Ideas are things,” Konchan writes in the book’s final poem, “Madonna and Child.” This statement obviously responds to William Carlos Williams’ “no ideas but in things,” and Kant’s “thing-in-itself;” but most importantly, challenges the greater cartesian duality between the material and the metaphysical, the body and the mind, the very notion that the relationship between idea and thing can be delineated.  How can we as viewers, as readers, separate any art object from our experience of it? “Madonna and Child,” which takes as its object the 14th century Duccio painting of the same name. can be read as a kind of thesis for the book, and its placement at the end of the collection asks the reader to return to the poems, to read again through a lens that has finally come into focus. This is an effective tactic, one that extends the experience of the book and compels the reader to find new resonances in the poems.

Interdependant to the question of idea and thing is the duality of subject/object, which Konchan also complicates by subverting literary conventions. Many of the poems in the book are sonnets, or gesture at sonnet form. Even when the poem’s length exceeds the typical 14 lines, the poems often hinge on a volta, and close with a rhyme. When considering the spectacle of literature, this is especially noteworthy because of the sonnet’s legacy as a love poem. Konchan uses the form of a love poem to dismantle (or at least challenge) romantic/Romantic conceits, which historically draw power from the separation between subject and object. The final poem in the book’s first section, “Love Story,” keenly disrupts the sonnet’s traditional subject/object duality by focusing the speaker’s attention on her own body, her own self: “My body has never been my body./ It has been a bucket of asphalt/ upside down in the puerile wind.” In Konchan’s version of the sonnet, the speaker is both subject and object. The speaker also breaks with convention by seducing the reader with a direct address: “Touch me./ Announce yourself./ Now is the heroic age.” Because of a persistent habit of subversion in the book, these poems could be read as feminist responses to the conventions of romantic and Romantic art, albeit subtle in their rendering.

The final challenge to the duality of subject and object is the reader. Konchan accomplishes this largely through the use of metapoetics, which disallow us from becoming suspended in the poems. In “Dead Metaphor,” Konchan writes:

I am a poem,
Lord, flyaway
cowlick on the
forehead of
preindustrial
man, singing…
I rise, octopi ink
streaming from
once-webbed
hands, to write you…

These lines compel us to be aware of the poem as a poem, a made thing; the poem indicts the poet, yes, but readers can’t ignore that we too are responsible for constructing meaning from what we look at. When we interrogate the spectacle of art,  “…the subject/ is no longer subject,” Konchan writes, “…The illusion is almost complete.” Eventually, The End of Spectacle asks the reader to assume responsibility for their own role as a spectator. We are compelled to parse the line between witness and participant, a task that, while timeless, feels especially important right now.

Kathy Goodkin is an editor for Gazing Grain Press and a manuscript consultant for the North Carolina Writer’s Network. Her book Crybaby Bridge won the Moon City Poetry Award, and is forthcoming from Moon City Press in 2019. Her writing has appeared in Field, Denver Quarterly, RHINO, Redivider, The Volta, and elsewhere.